When it comes to tracking new arrivals, you can count the number of fines for non-compliance on your hands. 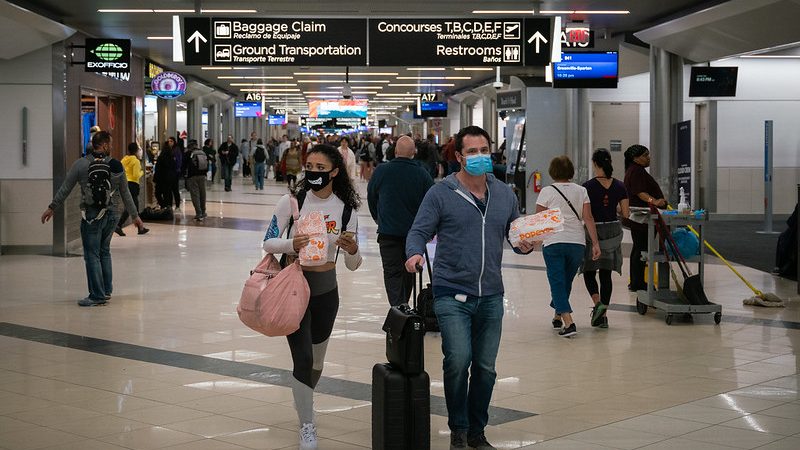 The UK’s contact tracing system is being undermined by major gaps in how new arrivals are tracked, new findings suggest.

Since June 8th, people arriving in the UK have to fill in a ‘Passenger Locator Form’ (PLF) online, which should be central to tracking the millions of people who arrive in the UK each month. The form outlines contact details and the location of the traveller so that they can be contacted if someone on the same journey is later diagnosed with Covid.

However, Left Foot Forward has heard repeated accounts of people not having their forms checked – and with few reminders, many could be slipping through the gaps.

Over the weekend it emerged that the UK Border Force – in charge of the PLF scheme – aims to check less than third of arrivals for test-and-trace forms.

The author returned from Greece – which has a rising number of Covid cases – on Thursday, and not a single passenger appeared to be checked they had completed the form. Border Force insists ‘spot checks’ are in place – but conceded that not every flight is checked.

A spokesperson for the agency said it had to ‘balance’ the risks of making people queue to check the forms. However, passengers already have to queue to go through passport and boarding pass checks.

LFF can reveal that only 10 fines have been issued for not completing a tracing form since the scheme was introduced in June. In a normal year, around 12 million people enter the UK each month.

Several recent travellers LFF spoke to only learnt about the form’s existence after arriving in the UK. Passengers returning from quarantine-list countries such as Spain also reported not being asked to prove they’d completed the form.

“It’s deeply worrying if the government are failing to manage this system properly.”

A Home Office spokesperson said: “The vast majority of arriving passengers are complying with all the requirements of the Covid-19 related health regulations at the border.”

The spokesperson would not give a specific figure for what proportion of passengers were complying – or how they knew that was the case, if only a third of forms are checked.

“All travellers need to fill out the PLF and those who fail to do so will be liable to be issued with a Fixed Penalty Notice of £100 in England,” the spokesperson added.

Martin McKee, a member of expert group Independent SAGE, and a public health professor at the London School of Hygiene and Tropical Medicine, said it was impossible to get data on how the scheme is working – or not.

There is ‘no overall strategy’ Prof McKee said: “Where does the [PLF] information go to? It’s a bit like telling people to isolate – no one follows it up.

“Are there any standard operating procedures? Are there performance indicators? We have no idea. You’d think we’d have our act together on this by now,” he said in an interview.

Border Force claims it is using the 4Es – engage, explain, encourage and finally enforce. There appears to be little of any of it going on…