The report said the opposite of what they claimed. 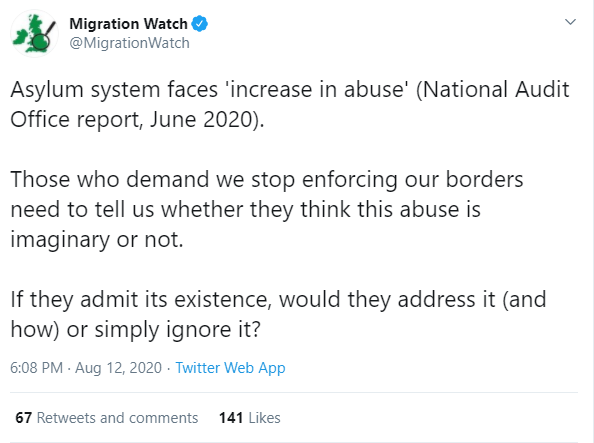 An anti-immigration group has misled the public and stoked fear of asylum seekers by misrepresenting a watchdog’s report.

In a tweet yesterday, ‘Migration Watch’ claimed the National Audit Office (NAO) watchdog had said the asylum system faces an “increase in abuse”.

The tweet was re-tweeted by the ‘New British Union for Greater London’ which describes itself as a “legally registered Fascist political party”.

Contrary to the tweet’s claim though, the NAO just said the Home Office “believes” that late claims for aslum indicate an “increase in abuse”. It said that the Home Office did not have evidence to support that assertion.

The NAO went on to say that the Home Office has has not considered the possibility that its own failures are leading to late asylum claims and deporations being cancelled at the last minute.

Home Office failings identified in the report include cases frequently being sent to the wrong teams, cases with errors or things missing in them and systems and technology not working, leaving Home Office staff unable to access the information they need.

These failings lead to asylum cases being rejected and deporations being cancelled at late notice, the report said.

The NAO says that around half of planned deporations are not completed and that the Home Office, without evidence, blames this on “spurious” legal challenges.

Home Secretary Priti Patel said recently that Labour-supporting lawyers were abusing the law to stop deporations. According to The Times, she told Tory MPs she was planning to reform the system in a way which would send The Left “into meltdown”.

It is not the first time Migration Watch have issued misleading statements. They were admonished by Full Fact after claiming net migration to the UK could be higher after Brexit.

And in 2014, Left Foot Forward reported that they had mis-represented a study in order to falsely claim immigrants cost Britain £3,000 a year. Their false claim was reported uncritically in The Telegraph.

And in 2010, a Migration Watch report ignored immigrants’ tax contributions in order to claim that they were stretching the education budget.