Only yesterday we heard that many Mail journalists are still working from home... 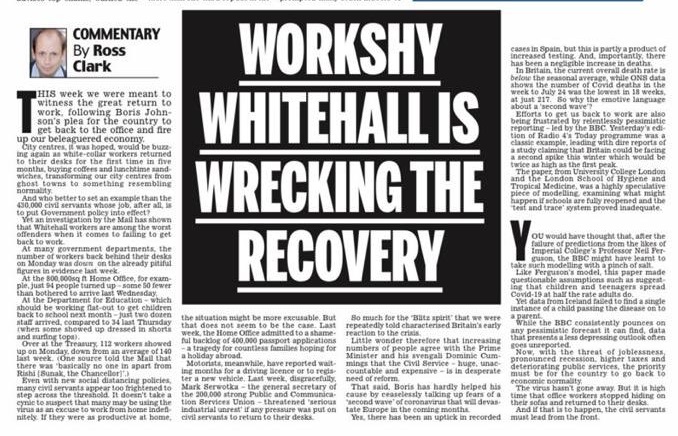 “Workshy Whitehall is wrecking the recovery,” an op ed in the Daily Mail thunders today, over reports that many civil servants continue to work from home. “An investigation by the Mail has shown that Whitehall workers are among the worst offenders when it comes to failing to get back to work,” its columnist sneered.

The paper’s editorial is similarly raging: “Unless the Government sends a clear and unambiguous call for workers to get back to the office, we face a winter of misery and mass unemployment.”

Yet only in June, the Daily Mail‘s Managing Director boasted of having “the miracle of the paper brought out with not a single person in the office, a totally empty newsroom”.

“Ask any of our journalists, and they’ll tell you they are working harder than ever just now…But the proof of the pudding is that, after deploying 200 laptops, 74 monitors, 71 keyboards, 33 Mifi devices, 16 Slack channels and 15 dedicated Zoom rooms, the Mail is not just surviving, but thriving,” the Mail‘s Alex Bannister wrote on Press Gazette.

Just yesterday Press Gazette reported that not everyone is back in the Mail office, with a ‘rota system’ in place. “With social distancing in place, not everyone can fit in at once” the outlet reported.

Are those Mail journalists all ‘workshy’ too? No, surely not.

Huge things can be achieved while working from home. Civil servants have implemented the ground-breaking and successful furlough scheme, the ‘eat out to help out’ vouchers, coronavirus support loans, an expansion of benefits, and much more.

“All this without a single soul [in the office]. So how have we done it? A large part of the answer is, of course, technology.”

“To suggest that civil servants are workshy is grossly offensive and insulting, and completely ignores the fact that our civil service has been performing incredibly effectively whilst largely working from home. Designing and implementing the furlough scheme and processing a six-fold increase in universal credit claims are just two examples of the remarkable feats our committed public servants have achieved over the last few months.

“The Daily Mail’s own managing editor was proudly boasting barely two months ago of how they had produced an entire newspaper without a single person in the newsroom. They know full well that the world of work has changed and more and more people are able to work effectively from home. It is a great shame that they should therefore give credence to such an ignorant and ill-informed view of the future of work.

“Public servants, who have never worked harder than over the last few months, deserve better than these petty, lazy attacks.”

PCS general secretary Mark Serwotka said: “The government is playing fast and loose with workers’ safety. No-one should be returning to a workplace until it has been made safe to do so. Current scientific advice is that people should work from home where they can.

“Boris Johnson is risking industrial unrest by pursuing this policy and our union will support members who believe their workplace is unsafe to return to.”

Politico’s Jack Blanchard wonders “whether the grim, lockdown-induced collapse in circulation of Mail-owned commuter sheets Metro UK (down 70 percent) and the i (down 38 percent) could possibly have anything to with this whole campaign.” Indeed.