The former Labour leader also revealed his regrets (few) and points of pride (many) as Labour leader, in a new interview. 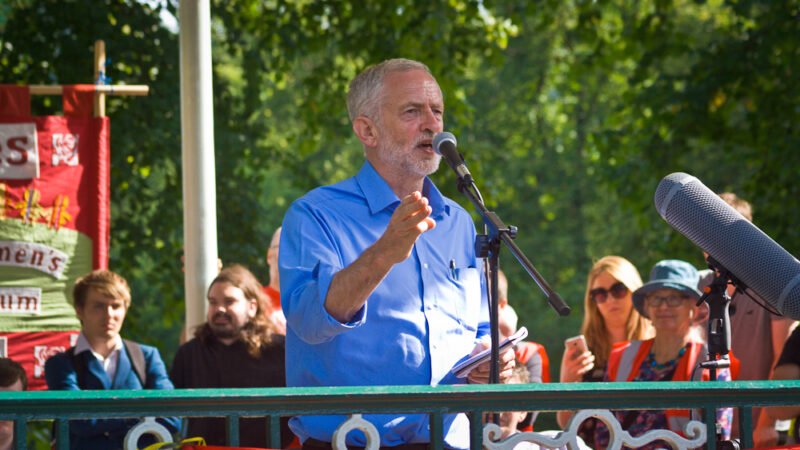 Former Labour leader Jeremy Corbyn has claimed the government had a “herd immunity” strategy to build up public resistance to Covid-19 in the early stages of the pandemic.

In an interview with Tribune magazine’s ‘A World to Win’ podcast, Corbyn described a government briefing he went to as Labour leader that he claimed was based on “eugenic formulas” of letting people die in large numbers.

He told the podcast: “I distinctly remember Jon Ashworth and I going to a meeting at the Cabinet Office where we got a lecture about herd immunity…The last time I discussed herd immunity had been when I worked on a pig farm 40 years ago.

“It was absurd: that you’d build up herd immunity by allowing people to die. And so, while the government was going into eugenic formulas of discussing all this stuff, they were not making adequate preparations,” Corbyn said.

No 10 has repeatedly denied that it ever had a herd immunity strategy. A spokesperson told Politico: “It is categorically wrong to suggest herd immunity was the government’s aim…Our goal is to reduce the impact of coronavirus.”

Corbyn also appeared to hit out at the establishment of the new NHS Nightingale hospitals, saying they “have hardly been used”.

In the interview with Tribune’s Grace Blakeley, Corbyn refused to say whether he got anything wrong during his time as leader: “The issue that dominated everything was obviously Brexit in the end…I campaigned for a yes vote, I felt we should remain and reform the European Union. We didn’t win that referendum.

“After that the party went into a long and serious debate, there was pressure for a second referendum…I tried to navigate all of this and it was extremely  difficult because the majority of party members – probably 70% – voted remain, and of Labour MPs it’s probably even higher, although to their credit many MPs that represented leave constituencies did try to articulate the Leave thing…I tried to bring people together,” he said.

“We reached the compromise we did at the 2019 conference, which went through overwhelmingly…and that was negotiate a trade deal with the EU and put the whole thing to a referendum in six months. Almost as soon as we agreed that compromise motion, people particularly on the remain side said we’re going to continue to Remain, and quite a lot on the leave side that we’re going to campaign to Leave. Sometimes I felt like almost the last person defending the party position.”

“Could we have done things differently? Hard to say, but I regret the time and energy that was taken up with endless debates.” Corbyn said.

Corbyn was more open about what he was proud of as leader: “We did develop an economic agenda that was radically different. I’m most proud of the fact that I stood for the leadership and won the leadership on the basis of opposing austerity” as well as supporting a ‘Green New Deal, a human rights agenda, and a foreign policy based on not going to war.’

He went on: “I’m very proud that as leader of the party I commented on the Chilcott report when it came out and gave a formal apology to the military families for what I believe to be the wrong and illegal Iraq war. I got vilified for that by a lot of people, but I’m proud of what I did. I said I’d do it and I did it.”

“Also I was proud of the work I did on the NHS and care…proud of the national education service…very proud of the pupil arts premium. And so we were unleashing an idea of a creative developing society with better rights.”

However, the Islington North MP spoke out about intensive media attention, adding that his ‘house was stalked out almost every day by hostile forces’ during the General Election. He is still getting unwanted press attention: “We slightly draw back the corners every day to see how many journalists are outside,” he said.

Corbyn revealed his early plans had he won the 2019 General Election: “I was looking forward to announcing as Labour Prime Minster, two days after the election: ‘as of now, rough sleeping is over.” The Conservatives claim they are commit to ‘end[ing] rough sleeping for good’.

But he added the party needs to ‘look forward, not back’ – a call that may jar somewhat with the party’s current reckoning with alleged antisemitism during Corbyn’s time as leader.

The former Labour leader had a final message for Keir Starmer: “Make sure our party is always proud to be a socialist party.”

The podcast is available here.