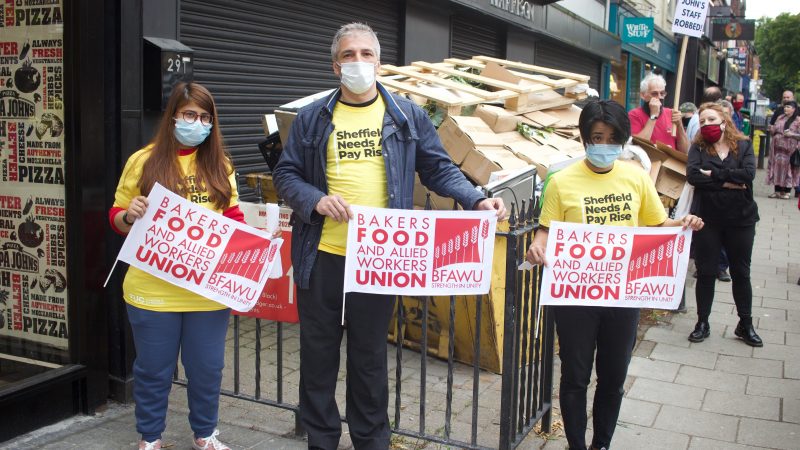 Workers and former workers at a branch of Papa John’s on Eccleshall Road in Sheffield protested on Saturday demanding wages they claim are owed to them from before the franchise changed hands in June.

Workers also claim they were faced with unsanitary conditions, had no access to private toilets during their shifts and were not given breaks during long shifts. Some also claim that their wages for the period from Lockdown until the 27th June amounted to less than the minimum wage.

The outlet had remained open throughout lockdown, but on 27th June workers arrived to find it closed. Workers say they had not been informed that there would be a temporary closure as the franchise changed hands.

The previous franchise owner, Tofur Ali, has been disqualified from being a company director on a separate matter.

In the month since, it is claimed that Tofur Ali had not paid workers the full pay they are owed, including all hourly wages at the legal minimum wage and delivery allowances. Some workers said they will be unable to pay rent and bills next week if they are not paid. They were willing to show evidence of the hours worked and amounts paid.

Karen Cabajar, a former worker at Papa John’s, and member of the Bakers’ Food and Allied Workers’ Union (BFAWU), who says she is still owed money said:

“I really thought that we would just have to move on and forget about what happened. It feels so reassuring to come together with my coworkers, with the support of the union and wider Sheffield community. It is important for workers and employers across Sheffield to see this action so that they know that it is unacceptable to treat workers this way and there will always be consequences.”

“Papa John’s states on its website: ‘People Are Priority Always’. This is a hollow statement when these workers were willing to put themselves and their families at risk by working during lockdown and Papa John’s repays them – by not paying them!”

As a result of the action, there will be a meeting between the former franchise owner and the BFAWU at 10.00 this morning.

Emma Burnell is a freelance writer and consultant.