"It's one thing going for the likes of fossil fuel companies, but an environmental NGO? Really?" 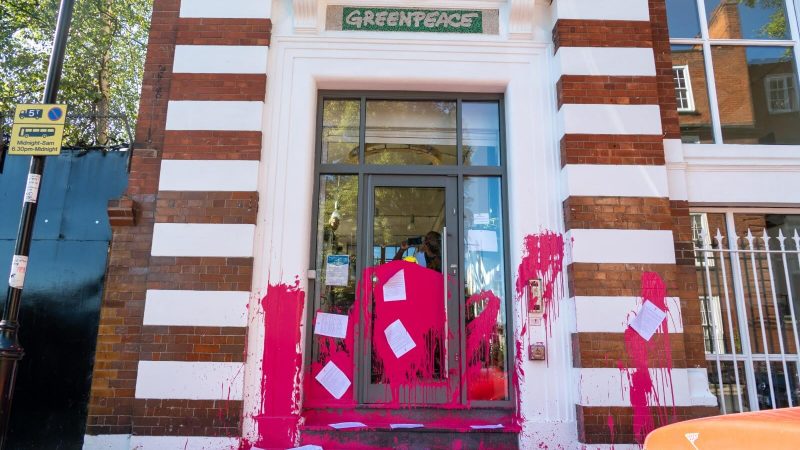 Beyond Politics (BP) – set up in June by senior figures in XR – targeted NGOs including Greenpeace, Amnesty and Friends of the Earth on Tuesday, accusing them of not being radical enough.

Arriving at their offices, they poured bright pink paint over walls and floors, before plastering them with letters demanding the organisations wrote to all their members, urging them to ‘rise up against the government’.

A number of party members were arrested and taken into custody without resistance, according to BP.

Beyond Politics launched in June with a stunt that involved stealing food from a Sainsbury’s in Camden, then attempting to distribute it for free.

Extinction Rebellion’s co-founder, Roger Hallam – a driving force behind BP – joined other BP members to pour paint on the environmental organisations on Tuesday, according to a statement from the party.

Hallam said: “The situation is beyond serious and beyond criminal. Our government is presently planning for the murder of billions of people in order to keep the carbon economy in existence. NGOs are living in a zombie world of middle class privileged politeness and denial. There is zero emotional connection with the horror and terror.

“They need to organise hunger strikes, property damage, mass civil disobedience, not petitions, emailing and quiet words with civil servants. If they are not willing to do this, they should stop deluding people into giving £3 a month to pay their office overheads and get out of the way. Only revolution can save us now.”

However, Green Party activists and climate campaigners reacted with anger online. The co-ordinator of Eastbourne Friends of the Earth (FoE) wrote on Twitter: “Oh dear…behaving like utter twats. Casual vandalism like this solves absolutely nothing & is a gross insult to the many campaigners, staff & volunteers, within [FoE] who work tirelessly in all sorts of ways to secure effective #ClimateAction. #BeyondSense.”

Green and climate activist Helena Bennett added: “This is just absolute nonsense. What an incredible waste of time and resources. It’s one thing going for the likes of fossil fuel companies, but an environmental NGO? Really?” The majority of other responses from climate campaigners were critical.

The party replied to the anger: “All of the other big NGOs are complicit in [climate change] via their failure to stop it. These NGOs must help us replace the UK Government with #CitizensAssemblies that go beyond politics & its vested interest.”

The party has set up a crowdfunder to raise £50m to ‘bring down the government’ on July 25th, which has raised £250. It has eight days to go.

Going ‘Beyond Politics’ is a demand of Extinction Rebellion, through setting up citizens’ assembly on climate change. However, the groups insist they are separate.