The government has not implemented a tax on tobacco - which it proposed a year ago. 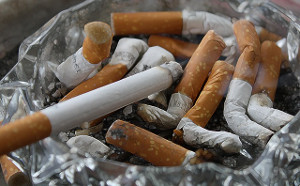 A year ago, the government published a Green Paper on Health Prevention that included a proposal on working for a “Smokefree England by 2030”, defined as a rate of smoking below 5% of the population.

As a route towards that, the paper proposes a fund on the “polluter pays” principle, forcing the tobacco companies to pay a fraction of the massive windfall profits that they enjoy into a fund to help people quit the addictive, deadly product they sell.

In practice, this would be paid by the four oligarchical companies that between them have 97% of the global market.

A lot has happened since the paper was published a year ago. One of the positive impacts of the Covid-19 epidemic is that many people have used it as a force to help them stop smoking. One million people have quit – which is extremely good news for their health and wellbeing, and for reducing future pressure on the NHS.

That means smoking is now very much a minority pursuit – only 14% of people now do it. Many must have taken a look at the fact that tobacco-related illnesses greatly increased their risk of suffering badly, or dying, from SARS-CoV-2 and taken the tough step of giving up a highly addictive product.

The government of course has taken many emergency measures, including some of the most draconian legislation ever passed in the UK, but a year on from that Green Paper, there’s no sign of a levy on the tobacco companies, which might have funded extensive quick action to help many more people quit, grabbing the opportunity afforded by Covid-19 and immediately reducing its impact.

That inaction was the subject of a question in the House of Lords yesterday from Lord Faulkner of Worcester.

This is not just a national health issue, as I put to health minister Lord Bethell. It is also very much an issue of regional inequality and poverty.

Half of the differential life expectancy between rich and poor can be attributed to smoking.

People – particularly those in the most deprived areas, and those who struggle economically – need targeted help to assist in quitting – which means skilled, experience, paid staff.

That’s something that the tobacco companies should pay for.

But don’t they pay other taxes, I hear you ask? Although you probably won’t be surprised to hear the answer – which is not really, as researchers at the University of Bath demonstrated last year.

Even the tobacco excise, which raises £9.5 billion across the UK – paid of course by smokers not the companies – is £1.5 billion short of the direct costs imposed by smoking.

Even if they won’t make the “polluter pay” – Big Tobacco covering some of the damage inflicted by its products – you might think that the government would be doing everything possible to discourage smoking, and protect people from what’s known to be the health damage of secondhand smoke.

But no. Yesterday in the House of Lords, the government refused to take simple steps to do that in emergency Covid-19 legislation.

The Business and Planning Bils makes provision in the light of Covid-19 social distancing to make it much easier for pubs, cafes and similar businesses to apply to use pavement and road spaces, essentially shifting their tables and chairs outside.

It is, of course, illegal to smoke inside such premises. It has been for well over a decade. The evidence is that removal of that exposure has helped lots of people quit smoking and stay non-smokers.

Yet in its initial versions of the Bill, the government did not move the ban with the tables. There was no smoking restriction on the outside seating at all.

Under enormous pressure, from campaigners, peers and some MPs, it finally shifted yesterday, moving an amendment to ensure provision of smoke-free areas, but not demanding that all of these seats moved from inside to out be smoke-free.

My fellow Green peer Jenny Jones commented: “I do not understand why on earth the Government are being so weak on this.”

I agree – and I don’t understand why the Labour Party went with the government, rather than a Lib Dem drive to make these spaces smoke-free.

This was far from just a party issue. There was plenty of support too for that drive from the cross-benchers, with a notably powerful speech from Baroness Grey-Thompson noting how cigarettes are customarily held at face level for wheelchair users, and that they, and also people with visual disabilities, can find it very hard to move away from the smoke. She noted: “I have had cigarettes waved in my face, I have been burned by lit cigarettes and I have had ash flicked in my face.”

And Baroness Finlay of Llandaff, a top doctor, noted the interactive effects of smoking and drinking together, particularly on mouth, throat and laryngeal cancers. Plus, the impact on staff, and the risk of people who have quit finding their resolution weakened by the impact of smoke and alcohol consumption.

Lord Bethell told me it was not the government’s “style” to introduce emergency legislation.

Yet it did that very thing yesterday. Astonishingly it was emergency legislation that will act to promote smoking, and exposure to second-hand smoke. In the age of Covid-19, the government is promoting the profits of tobacco companies rather than the health of the nation.

Natalie Bennett is an associate editor of Left Foot Forward and a Green member of the House of Lords.