"Failure to exclude the NHS from trade deals may result in unavoidable and irreversible marketisation of the UK healthcare." 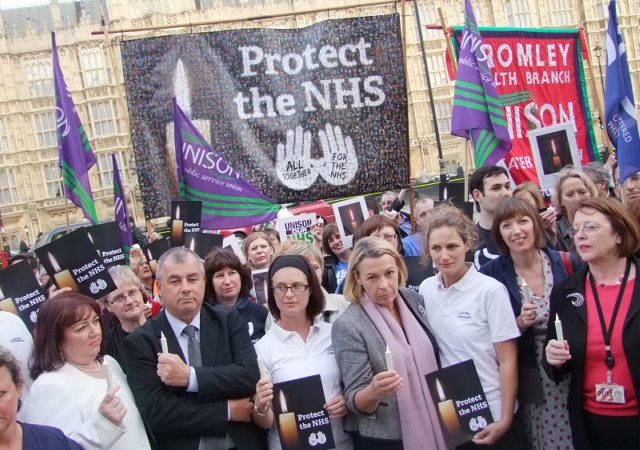 Over 400 NHS and public health professionals have signed an open letter to all MPs calling for the NHS to be protected from trade deals.

It comes as the Trade Bill – which sets the framework for post-Brexit deals with other nations – reaches its report stage on Monday. A series of amendments are being submitted, including one tabled by Conservative MP Jonathan Djanogly which would give parliament the power to scrutinise and vote on future trade deals – a power they currently don’t have.

Nearly 4,000 people have written to their MP asking them to support this amendment. This is in addition to the more than 1.2 million people who have signed a petition from Keep Our NHS Public calling for the government to protect the NHS from trade deals.

Among the supporters are senior and high profile figures from the health service, health publishing and academia – including The Lancet editor Richard Horton and the President of the Faculty of Public Health, Prof Maggie Rae.

Dr Sarah Walpole, a junior doctor, who wrote the letter says: “In the UK, we take it for granted that we won’t go bankrupt paying for medical treatment. COVID-19 has shown us the importance of healthcare being accessible to all, and the value of our NHS and public health system.

“The Trade Bill in its current form leads the way towards ongoing fragmentation and marketisation of UK health services and higher drug prices, a path which the NHS may not survive. If services are contracted out to private companies through trade deals, this may be irreversible due to international law.

“We are calling on MPs to protect the NHS by voting for amendments to the Trade Bill that exclude health services from future trade deals.”

In the letter, the health professionals go on to claim that failing to protect the NHS from trade deals would open up the NHS to being charged more for drugs, enshrine the rights of American healthcare companies to access the NHS in international treaties and “lock in” privatisation that would be incredibly difficult for a future government to reverse.

Public ownership campaign group We Own It has been calling for the NHS to be excluded from trade deals for the past year.

Speaking on the forthcoming Trade Bill, We Own It Director Cat Hobbs said: “At a time when we’re relying on our health service more than ever before, it’s beyond shocking that the government would pass legislation that could see our NHS be carved up and sold off.

“Boris Johnson’s warm words aren’t enough. We can’t wish away the threat that trade deals pose to our NHS. Instead, what we need is concrete protection. To make matters worse, right now we not only don’t have this protection, but parliament isn’t being given the most basic powers of scrutiny on trade deals. That means neither MPs, nor the public will be able to see what is being included, and how our NHS will be affected.

“MPs debating the Trade Bill must listen to the public and stand up for our treasured NHS. At the very least, they must back Jonathan Djanogly’s amendment to allow parliament to scrutinise future trade deals. If they don’t, their constituents won’t forgive, and they won’t forget.”

As public health and healthcare professionals, we ask politicians to protect all aspects of the NHS by supporting amendments to the Trade Bill.

Protection of the NHS must be written into the Trade Bill, otherwise, the NHS will be on the table in future trade deals.

‘Negative listing’ in trade law means that unless explicitly excluded, the NHS will be automatically included in trade deals. Mechanisms to protect all aspects of the NHS, current and future, must, therefore, be written into the forthcoming Trade Bill.

Failure to exclude the NHS from trade deals may result in unavoidable and irreversible marketisation of the UK healthcare.

Due to the nature of international law, failing to exclude the NHS from a trade deal could ‘lock-in’ marketisation and privatisation within the NHS.

Trade mechanisms include the Investor-State Dispute Settlement (ISDS), which allows a company to sue a government for threatening their profits by imposing barriers to trade. Such mechanisms give increased power to corporations and make it very difficult to reverse any contracting of services, even when a company fails to meet contractual obligations or standards.

Free trade deals risk increasing the price of medicines (which can cost more than twice as much in the USA as in the UK), reducing access to medications, compromising the safe storage and processing of NHS data (which could be mined by companies based in countries where fewer data protections exist) and undermining the National Institute for Clinical Excellence (NICE) if companies challenge NICE’s decisions as ‘barriers to free trade’.

Marketisation is detrimental to the NHS, due to increased transaction costs, fragmentation of the health system and cherry-picking by private providers.

Contracting out NHS services is inefficient and has not improved quality of care. Private companies have the option of choosing where, when and to whom to provide services. Large multinational companies may have less ability to identify local needs, partner with local organisations and be accountable to local communities. Private companies ‘cherry-pick’, only delivering services when it is profitable for them. For example, ‘GP at Hand’ an app provided by the company Babylon, has been criticised for misleading advertising to patients and cherry-picking (83% of its patients are aged 20-39 years).

Protecting the NHS from Trade Deals has public support. 84% of the British public said that they want the NHS to be fully public. In last year’s elections, all major political parties pledged to protect the NHS. To fulfil their promise, we ask politicians to support amendments to the Trade Bill to mandate adequate scrutiny of all trade deals and to provide explicit protection to the NHS in future trade deals.