Some of the equipment may be being used to crush Black Lives Matter protests right now. 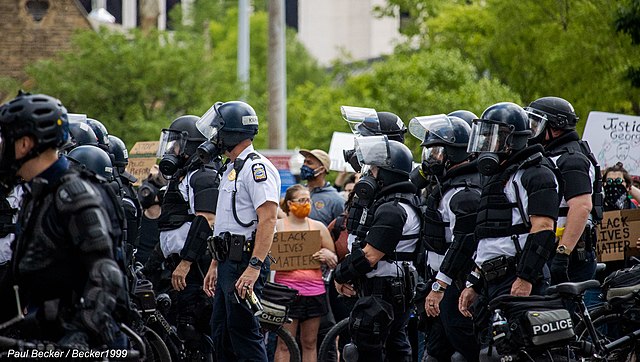 The UK granted £760,000 worth of anti-riot and ballistic shield export licences to the US last year, according to data gathered by Campaign Against the Arms Trade.

Arms campaigners are calling on the government to halt sales of riot gear to the United States, while states and the federal government continue to use repressive tactics to halt the Black Lives Matter protests. Last year’s sales of riot gear from the UK to the US were the largest in at least a decade.

The protests erupted after George Floyd, an African American man, was killed by police in his hometown of Houston (Texas) last Thursday. Protesters are demanding accountability for the policemen who watched as one of their colleagues crushed Mr Floyd to death, and an end to institutionalised racism in the US police and justice system.

It’s quite possible that UK-made riot gear is being used to crush Black Lives Matter protests right now. Police in Washington DC used tear gas to disperse demonstrators in Washington DC last night, and continue to use force to quell demonstrations in Texas and across the US.

The UK has granted 31 export licenses for anti-riot/ballistic shields to the US since 2010. In total the government has approved at least £2.1m worth of security and para-military police goods to the US since 2010, including tear gas canisters, rubber bullets and body armour. There was also one ‘open ended’ license granted for an exporter worth an unlimited value in 2010 for police equipment.

It is a fraction of the value of the arms export industry – but it could send a powerful message if the UK halted these licences.

Shadow International Trade Secretary Emily Thornberry has written to minister Liz Truss calling on these exports to be banned if they are being used against the current protests. Ms Thornberry said: “If British-made riot control equipment is being used to attack unarmed protesters and journalists in the US, those exports must immediately be stopped. We cannot be a party to the violence of the American President against his own people.”

“The police violence that we have seen over recent days has been absolutely appalling, and so has the reckless and totally irresponsible escalation from the President and his colleagues.

“Police racism and violence is not a new problem, unfortunately this is a story that has been happening for centuries. That is why these arms sales should never have taken place and the government must ensure that they do not happen again. This kind of equipment is always repressive and it can be deadly. That is why there must be an urgent investigation into what weapons have gone over and if any of them have been used against protesters.

“Silence in the face of such injustice is compliance and it is long past time for an end to the uncritical political support that only helps to enable and normalise it. The stakes could not be higher. We are always being told about the great relationship and influence that Boris Johnson has with the White House. If that is the case then he must use it to condemn the violence in the strongest terms and call for widespread and structural change.”