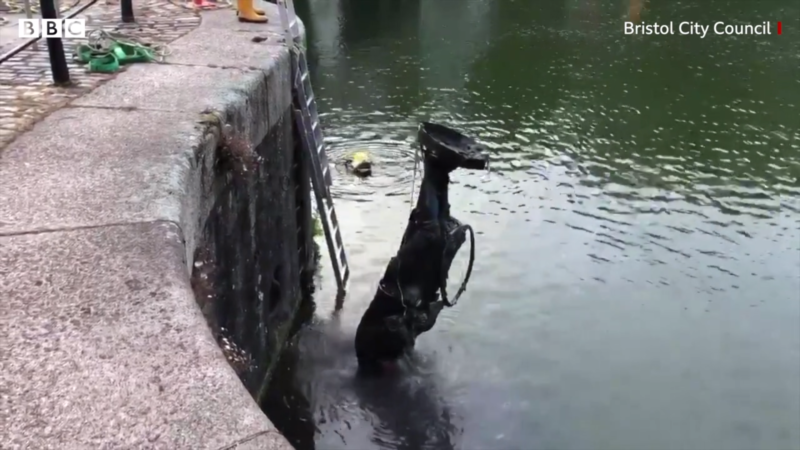 Like many Brits, I had never heard Edward Colston’s name before Sunday. As numerous people far smarter than me are pointing out, the little we learn about the Empire in school tends to skip the brutality of British colonialism.

However, a quick search told me that between 1672 and 1689, his ships had transported around 80,000 men, women and children from Africa to the Americas.

The chests of these black men, women and children were branded with the company’s initials, marking them as property rather than fellow humans. It is estimated the awful conditions on these ships lead to 20,000 of these people dying on the way – their bodies tossed into the sea. So, to say I had no qualms about his statue being chucked into Bristol Harbour is as much an understatement as calling the combination of his humanitarian record and philanthropy “mixed”.

Yet data from YouGov suggests less than 15% of Brits feel that way. A clear majority disapprove of either the removal of the statue and/or the way in which it was removed. When split by political positions, only 3% of Leavers and Conservative voters approved what was done, and how, while around 50% opposed both.

These figures are in line with polling from this year, showing less than 20% of Brits regard the Empire as something to be ashamed of. 70% were proud or felt neutral, with 50% of Leavers and Conservative voters endorsing the former. Comparable numbers believed colonised countries benefited from the experience and would personally still like to have an empire. I have explored the relationship between pride in the empire and political orientation before, and argued it is consistent with a particularly Brexity conceptualisation of what Britain is.

In his book, ‘Imagined Communities’, Benedict Anderson points out members of communities exceeding the size of a small village will never meet or be able to interact with everyone else. Nations are, therefore, imagined entities in which individuals derive their collective identity, and affinity through shared historiography: including narratives and artefacts such as flags, phrases and anthems.

This iconography represents a way individuals in a community can connect to other members, past and present. When people mumble words sounding like “scatter her enemies and make them fall” before a rugby game, they do so with every generation since 1745. Through this lens, Colston’s statue is not just a carefully sculpted block of bronze; it is an emblem of a particular kind of Britishness.

It’s a version that, despite Brexit, many conservatives fear has already been displaced, or toppled. UK nationalism used to be a long-distance version of nationhood, exceeding physical boundaries. Former British territories gaining their independence, the division of the UK into devolved parliaments, and an increasingly centralised Europe all represent the slow erosion of this idea. Hence Nigel Farage feeling threatened enough to liken protestors to the Taliban, before failing to answer if he would like Saddam Hussein’s statue to be re-erected.

I suspect the reason he could not answer is he knows statues are not politically neutral artefacts. They are expressions of an imagined community’s values. Colston’s was put up 174 years after his death, and 62 years after parliament voted to abolish slavery in most colonies.

Like similar statues, it symbolises tyranny and transgenerational trauma to those who have been, or are, oppressed by Britain’s imperialist history. The preservation of these monuments commemorates, and arguably celebrates, the historical roots of white supremacy. In Bristol, by suggesting their role within this imagined community is to be subservient, Colston’s statue honoured the subjugation of black people in Bristol.

Perhaps the most common objection to the toppling of Colston is that it supposedly did not happen democratically. Yet, since the early 1990s, there have been several drives to remove it, including a petition, which gained over 11,000 signatures. Professor Kate Williams has also outlined the arduous process of trying to make a small change to the plaque currently describing the slave trader as “virtuous”.

These campaigns were met with no avail, implying if it were not for direct action, then Colston may still have been standing for years to come.

The historian David Olusoga recently wrote that the removal was not about erasing history. Rather, it was about making it. Monday marked the first full day, since 1895 that the likeness of a racist, mass murderer would not triumphantly cast its shadow over Bristol’s city centre. If this is not something worth commemorating, I don’t know what is.

Regardless of what the people of Bristol choose to do with their now empty plinth, it will be an empowering moment, not just for them, but also for the whole country moving forward. Many have learnt more about British history in this past week than they have in decades.

Dr David S. Smith is a lecturer in psychology at Robert Gordon University.