Shaky foundations - in more ways than one. 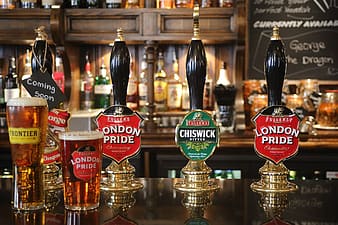 The government this month has made three big moves in trying to begin economic restoration as we move beyond the Covid-19 lockdown shock.

First up was the re-opening of ‘non-essential shops’ – the “go shopping” cry, as numerous rightwing sources interpreted the direction of the Prime Minister. Because consumption of fast fashion and plastic tat is just what the nation and our battered planet (doesn’t) need.

Next up was the announcement this week of the plan to begin the (limited) reopening of pubs (and restaurants – but most of the talk has been about pubs, with many restaurants deeply sceptical about the financial and physical practicality of the proposals. You might call it the Boris Johnson “go drinking” plan – including a “check-in” at the pub plan, about which the cartoonists have their doubts.

Jacob Rees-Mogg had to go further beyond parody, however, suggesting that a “yard of ale” should be the post-lockdown pub drink of choice – almost as though there wasn’t evidence that in a society that already had an alcohol problem had suffered an increase in the problems under lockdown.

Now of course it is great if people can get back together, talk, laugh and socialise – and pub outside spaces can be a good space to do that, in a controlled and managed way – but is this the best thing to build our “recovery” on? Shaky foundations in more ways than one.

The third step was an attempt to “turbocharge” the food and drink industry into recovery. Now given the issues of food security exposed by the pandemic, and the issues around our broken food system producing an epidemic of obesity and ill health, you might have thought that would be focused on the production of fruit and vegetables for local consumption in the UK, and ensuring it would be distributed in the most vulnerable communities.

That, however, would require you to know nothing about the UK government.

No, this is a turbocharging based on exporting food – and includes “an overseas virtual buyer trial, a ‘Smart Distance Selling Process’, and a package of ‘Ready to Trade’ Exporting Masterclass webinars”. The accompanying picture majors on spirits, with a side serving of ultra-processed canned and plastic-wrapped goods.

It’s competing with Rees-Mogg in the “jumping the shark” class. (Although I wouldn’t complain about a programme to promote small local producers for the British market. I’ve just put in my latest order from the very fine Wold Top Yorkshire brewery: their gluten-free marmalade porter is spectacular.)

That theme parks are reopening before schools has become a commonplace observation, but there’s clearly a bigger problem here – a lack of imagination, a lack of creativity, of engagement with the creative industries, and thinking about how we can build back a better society after the coronavirus shock – create a society less dependent on low-paid, insecure employment (shops and pubs), focused on restoring the depleted, damaged natural world, a society more resilient to the future shocks we know are inevitable.

Meanwhile, the creative industries – theatres, musicians, museums, festivals – are bleeding, and fearful. These are forms of employment that are very often insecure and low-paid, but do at least provide people with the opportunities to use their skills and talents in a way they’ve chosen, in a way that improves the lives of others.

And even in the narrow economic terms the Conservative Party favours, these are crucial to the UK’s economic future – growing before Covid-19 far faster than other segments of the economy.

To rebuild Britain, why is the focus not on them?

As I suggested last month on Yorkshire Bylines, a programme funding their engagement with schools and communities would be a healthy, health-giving, and productive way to tackle practical problems for both.

Funding through local government performances in local town centres could help to carefully encourage the return of people to support small independent businesses. Supporting programmes for senior citizens and other community groups – distanced music lessons anyone? – could tackle the already virulent loneliness epidemic that can only have been magnified by lockdown.

“Levelling up”, in the government’s favoured term, town and city centres in the most disadvantaged parts of our country through a giant programme of community art would be good for mental health, and local economies.

Then there’s the state of nature. A Green New Deal – focused on energy efficiency, particularly in homes, on active transport, on renewable energy – is obvious and being widely advocated.

But it would be quick and easy – an obvious early step – for the government to support the proposal from a coalition of charities and campaigns, from National Parks to the Woodland and Wildlife Trusts, to establish a “National Nature Service”.

The group has identified 330 schemes to help wildlife, provide “pocket parks” in cities and prevent flooding.

We’ve lived in a pre-Covid world in which all too often the economy – whether through air pollution, overwork or insecurity – made us ill, and we relied on the National Health Service to patch us up.

This could be the time when we start to turn that around – to structure a healthy society that meets everyone’s needs and supports their wellbeing.