March celebrates 50th anniversary of London Gay Liberation Front, as protesters in their 70s and 80s put ‘politics back into Pride’ with five demands. 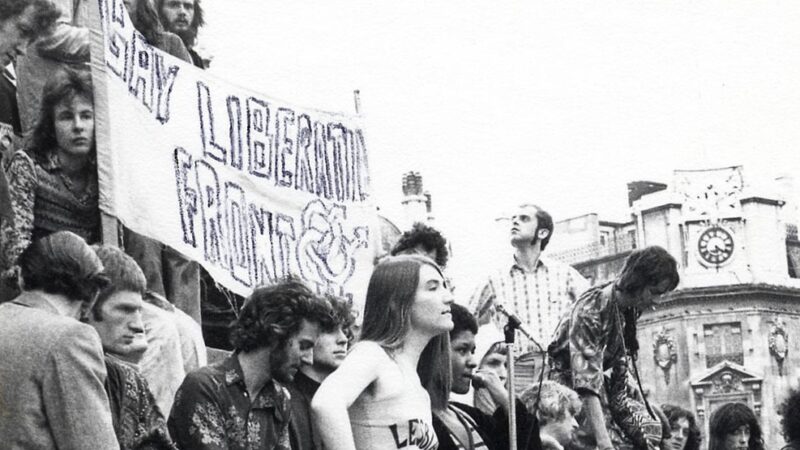 This weekend’s Pride in London parade has been postponed due to the coronavirus pandemic – but veterans from the liberation campaigns of the 70s plan on marching anyway.

Activists from the Gay Liberation Front – which soared to prominence in the early 70s liberation struggles – will march along the same route that the official Pride parade was due to follow. The march is being coordinated by Peter Tatchell, who was a leading activist in GLF. Tatchell helped organise the first Gay Pride march in 1972, at a time when many pubs refused to serve gay people, police harassment in the community was rife, and homosexuality was still classed as an ‘illness’.

GLF is credited with being the beginning of the modern LGBT+ protest movement in the UK.

The veterans Pride march will take place on Saturday 27 June, starting at 1pm outside the BBC in Portland Place W1A 1AA.

Veterans and supporters will wear face masks and ensure social distancing, following the planned official Pride route down Regent Street, Piccadilly Circus, Haymarket to Trafalgar Square, where there will be speeches from GLF veterans.

The activists want to ‘put politics back into Pride’ amid criticism of the march becoming a ‘pinkwashing’ event for large corporations. The five demands are:

Peter Tatchell has attended every Pride London parade since 1972.

Nettie Pollard, 70, said: “50 years ago, the Gay Liberation Front said come out, change ourselves and revolutionise the world. Joining with other oppressed groups is the only way to work toward real change. Rights can so easily be taken away again. Liberation must mean freedom, including sexual freedom, for everyone. At Pride 2020, GLF still believes in revolution.”

Stuart Feather, 80, added: “Gay Liberation was the cosmic big bang beneath heterosexual and gay society with its call to come out – be visible – break the taboo…Based on the English revolution and the Quaker idea that ‘my word is my bond’, LGBT+ liberation will be the work of generations before there is general acceptance that without harm to others, my sexuality, my chosen gender, is my bond with society and no-one’s business but mine own.”

“GLF did not seek equal rights within a flawed, unjust status quo. It campaigned for the transformation of society to end straight supremacism and stood in solidarity with all other oppressed people,” said Peter Tatchell.

“A similar agenda of radical social change is needed now, as the UK faces the threats of Covid-19, economic meltdown, institutional racism, climate destruction and the demonisation of trans people. We support Black Lives Matter and the just demands of black communities and black LGBT+ people, like we did in the early 1970s,” he added.

The march bears the slogan: “Oppression for none. Liberation for all.”