On how our justice system is failing black people. 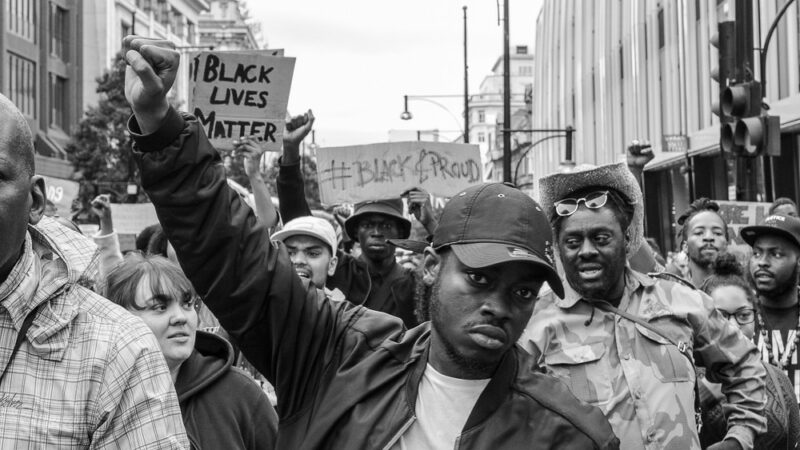 America’s citizens are protesting and rioting against the horrifying normality of a black man once again being killed by a white police officer. Alongside the protests in America, the UK has seen demonstrations in solidarity.

In the UK – where the blemishes of empire and imperialism remain in its not so distant past – racism is ever-present. If we drill down on the issue of the criminal justice system though, it quickly becomes clear there are dire similarities between the situation at home and in the United States.

Without a shocking viral video of modern day lynching every week,  as in the US, some would think police abusing their powers in the UK isn’t an issue. But police brutality has gone unchecked for decades.

Examples range from the ‘psychological destruction’ and murder of David Oluwale over 50 years ago, to Christopher Alder whose dignity was violated as he died in custody in 1998, to Mark Duggan being gunned down as he fled from police in 2011. In these cases and many more since, there are three distinct similarities running through them all: the victim was black, the killer was a police officer, and there was no conviction.

According to research from INQUEST, 1741 people have died in police custody since 1990, with black men disproportionately affected. Leading diversity think-tank the Runnymede Trust has shown that during the period of 1995-2015, not a single police officer was convicted over a black person’s death in custody.

These two facts illustrate the scale of the issue and the shocking impunity with which our police seem to act.  As in America, this above the law exemption for law enforcement has created a worrying dynamic – the public servants who are employed to protect us, are killing young black men with little fear of consequence.

Moving beyond deaths in custody, we see other elements of institutional racism rife within our criminal justice system. One glaring fault is the disparity with which police powers are applied.

Black people are up to 37 times more likely to be stopped and searched than their white counterparts. Similarly, Black people are 44 times more likely to be detained under the mental health act. These practices, amongst others, have led to the further criminalisation of (in particular) black men within our society, which in turn has contributed to black men being arrested at triple the rate of white people.Black men are being charged and convicted more and more often for low level offences, with 17% of arrests (compared to 5% for whites) coming off the back of stop and search.

There is a similar picture in prosecutions: if you are black you are at least three times as likely to be prosecuted and convicted of a crime. This has led to a dizzying rate of overrepresentation within the prison population.

While people from black ethnic groups represent 3% of the general population, they represent nearly 14% of the prison population. In addition to this, the Lammy Review conducted by David Lammy MP, highlighted the extremely high rate (51%) of BAME males in young offender institutions. The MP for Tottenham drew comparisons with the US, stating: “England and Wales are now hitting an American scale of disproportionality in our youth justice system.”

Getting away with murder

Another layer of institutional racism within our criminal justice system is the lack of prosecution for some of the most egregious crimes committed against black people. From the seminal case of the tragic racist murder of Stephen Lawrence in 1993, to the very recent death of Belly Mujinga, a black ticket controller whose husband says she died after being spat on by a white man who claimed to have coronavirus.

There are litanies of cases in which the police have failed to fulfil their duty to promote justice for all, while emphasising the racial prejudices that still infect some of their 93% white workforce.

So, while we watch the news and express our solidarity for the racial injustice that has corroded away at America for centuries, let’s shine a light on the ills within this country. Modern-day Britain is a state teeming with racial prejudice and discrimination.

Our institutions need to have a mantra instilled in their core: black lives matter.

Update: This article originally stated that the man who spat at Belly Mujinga had coronavirus. This has been removed as, although Mujinga’s husband said he claimed to have the virus, there is no evidence he actually did have the virus. The BBC has said it understands the man has since had a negative test.

Isaac Oliver is a writer and Labour activist.