How many former chancellors does it take to change an economy? 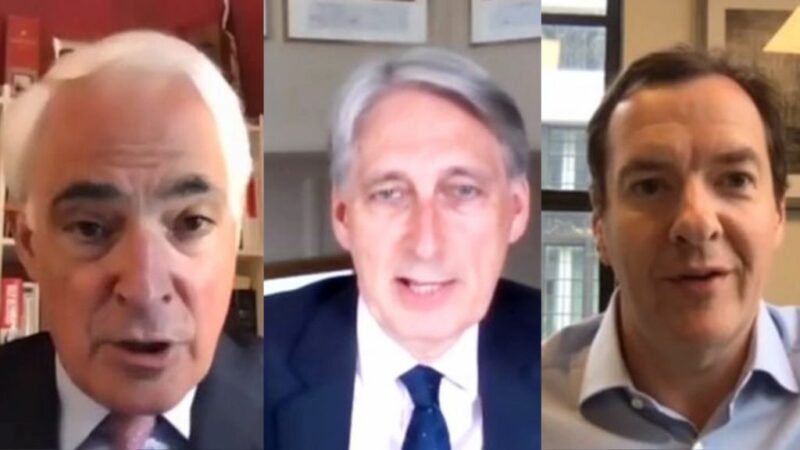 Many people likely to be reading this are probably familiar with the hashtag #BuildBackBetter.

It’s being used by a wide variety of groups and individuals broadly on the progressive side of politics, and delivers a message: what we were doing before the arrival of the coronavirus was disastrous, riven with poverty, inequality and environmental destruction. Many would add that the nature of the economy made us more vulnerable to Covid-19.

But that’s our side of politics. We’re just starting to see what might be broadly called ‘the other side’ emerging to offer their economic prescriptions for the future.

They’ve been laying low, as the nation turned out week after week to applaud our carers. The discussion of how our most essential workers are our lowest-paid and insecurely employed dominated the airwave. The idea that simply chasing growth was not the answer – particularly given that we’re going to see a massive collapse in GDP figures – also gained traction.

But as the government tries to push a reluctant and sceptical nation back to work – despite continuing high levels of infection and death – the other side is coming out.

This week the Treasury Select Committee rolled out three former chancellors to testify about how to start recovery from the economic shock of coronavirus. The recipe they collectively offered might be described as #BringBackFailure.

With a small nod to the impacts of coronavirus, collectively they were offering prescriptions that aimed to revive the ramshackle, rattling, pollution-belching old jalopy of the pre-Covid economy. They celebrated its “low unemployment” – while ignoring the insecure, low-paid, exploitative nature of so much of that employment. And they paid only a token nod of acknowledgement to the looming tsunamis of climate emergency and the nature crisis it was creating. Their talk was all about jobs, not about incomes and security. No universal basic income innovation here.

One proposal occupied an inordinate amount of time and energy given its minimal impact: George Osborne, backed by Alistair Darling (he was Gordon Brown’s Chancellor in case you’d forgotten) wanted to abolish the very limited restrictions that apply on Sunday trading in England and Wales, which keep large stores limited to six hours’ opening time. “Let the supermarkets run free!” (I paraphrase.)

It means increasing the dominance of multinational chains that drag money out of regional and country areas into London – and all too often into the nearest tax haven. It means speeding up the destruction of small independent businesses and local economies.  In other words, more of the same old failed model.

Unsurprisingly, with these stalwarts of neoliberalism, alternative approaches didn’t feature. How about rebuilding strong local economies around small independent businesses and cooperatives? Focusing on essentials such as local food production? Or making a four-day working week as standard with no loss of pay? These are debates which have been gathering considerable momentum before and during the pandemic.

The ex-chancellors backed that old standby of the construction sector: “Building on the green belt” as Osbourne demanded. That’s despite all of the arguments against it. Not to mention the failure of their beloved model of treating houses mostly as financial asset – rather than a secure, affordable home for people to live.

What they also failed to acknowledge was any doubts in their faith in “growth”. They wanted to “grow the economy”, create “economic recovery”. For whom? They were words that left me thinking about a recent research showing that people on low incomes see “the economy” as being something that makes the rich richer and the poor poorer.

But none of The Three appeared to have given a thought to the question of why decades of growth have given us such a deeply unstable, insecure society – weighed down by obesity, tormented by mental ill health. They gave no sign of understanding the deep anger that drove the result of the Brexit referendum result.

One thing I can agree with Osborne on: the current state of instability of our world.

The financial crash of 2007-8 was described as a one in 100-year-event. Yet here we are a decade later looking at another event on a similar – or larger – scale.

We are in a deeply unstable, uncertain world. But the Committee heard nothing about how that’s been partly powered by the chase for efficiency and profit-maximisation.

No one was asking this question: “What is the economy for?”

My answer? It is to give us a secure, decent life, where everyone should be able to put food on the table, and keep a roof over our heads. Or to use more terms that didn’t feature at the Treasury Committee: to meet the Sustainable Development Goals that the world has agree should be reached by 2030. They should be guiding the shape of Rishi Sunak’s economic plans. Sadly they are goals that Britain is way off track meeting.

Natalie Bennett is a Green member of the House of Lords and a Contributing Editor of Left Foot Forward.