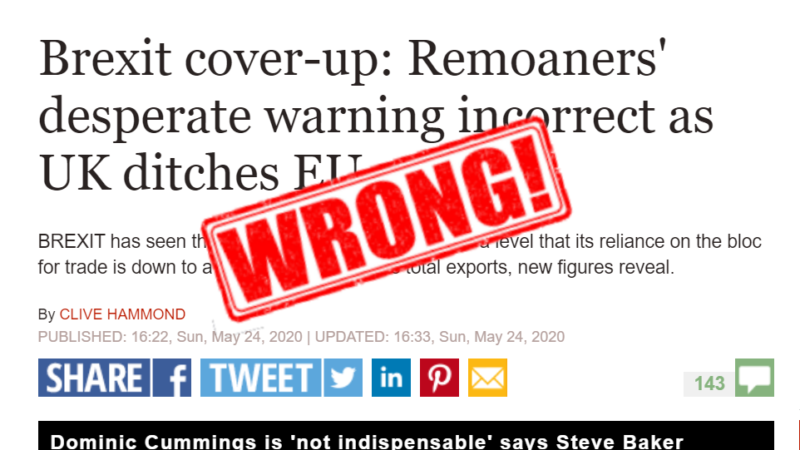 The Brexit-backing Express newspaper has been corrected by independent fact-checkers, after publishing a misleading report on the UK’s trade with the EU.

Over the weekend, the right-wing outlet reported that:

“Brexit has seen the UK reduce EU exports to such a level that its reliance on the bloc for trade is down to a fraction of the nation’s total exports, new figures reveal…The data, published and researched by pro-Brexit organisation Facts4EU, show that just 7.7 percent of UK goods exports were with the EU.”

It was just plain untrue, Full Fact have now pointed out. The respected charity said it was ‘significantly wrong’: “The correct figure [of UK exports to the EU is 46%, according to the latest available data for 2019.”

In other words, far from 7.7%, nearly half of all our goods exports go to the EU – putting UK manufacturers at risk of damaging delays, tariffs and bureaucracy when we leave the single market.

Full Fact found that the Express had misquoted figures claimed in a press release by Facts4EU, a pro-Brexit news site, which noted that goods exports to the EU accounts for 7.7% of our GDP – the monetary value of all finished goods and services in the economy.

It’s a pretty misleading comparison in itself, given that the the EU remains by far our largest trading partner – and that almost anything looks small as a percentage of an economy’s entire domestic product.

In 2018, UK exports to the EU were £291 billion (45% of all UK exports), according to the House of Commons library. The latest figures put the figure for 2019 at 46% of all exports. In other words, UK manufacturers are dependent on our continental neighbours.

UK imports from the EU were £357 billion (53% of all UK imports) in 2018 – again putting UK consumers under real threat from tariffs and price rices when we exit the transition period.

Just to put that correct ‘7.7% of GDP’ figure into perspective. The UK’s entire construction sector accounts for just 6% of our GDP. And agriculture – which uses 69% of the UK land area? It employs just 1.5% of its workforce and accounts for a hefty…1% of GDP.