"Rather than supporting the national effort and rallying round our NHS, a private company is looking to make a quick buck," campaigners told LFF. 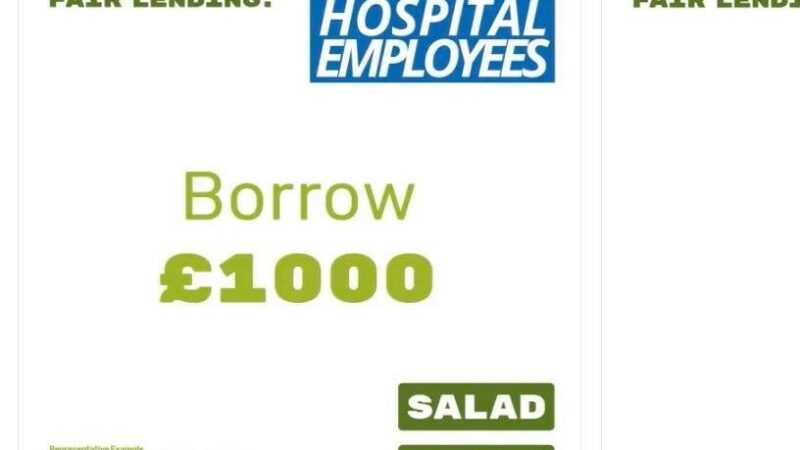 A loan company has been accused of hijacking NHS branding to promote pay day loans for health staff, LFF can reveal.

Salad Money – a for-profit ‘social enterprise’ set up in 2018 – provide loans exclusively to NHS employees of up to £1000. The company charges an annual interest rate of 69.9% to most NHS employees. For contrast, the NHS Credit Union, operating in Scotland and the North of England, charges 19.6% APR, and most credit unions charge around 1% a month.

The firm has been promoting loans to NHS employees on social media, using branding similar to the NHS. An advert (pictured) went live on the 11th May on Facebook and Instagram, amid the coronavirus pandemic – and appears to mirror the NHS’ branding, telling people to ‘Apply Now’ to ‘Borrow £1000’.

The ad features text saying ‘Hospital Employees’ in a style close to the NHS logo. NHS branding is explicitly protected in law, in addition to copyright laws. One graphic designer told LFF the material looks likely to be in breach of NHS guidelines: “It uses a near identical typeface, near identical colour palette, identical housing.”

Analysis of the colour data shows the blue hue is almost identical to the NHS logo, ‘clearly trying to draw associated connotations with the NHS’, one designer told this site. It is understood that Salad Money refute this.

The company – which says it provides ‘urgent’ loans – has a partnership with Mersey Care NHS Foundation Trust, but it understood the rest of the NHS employees – around 1.4m of them – would have to pay 69.9% APR to borrow with the firm.

Lib Dem leadership hopeful Wera Hobhouse MP criticised the ads, saying it was ‘probably aimed at using the positive NHS image for their own purposes’.

Pictured: Instagram advert for Salad Money. The information on the repayment rate setting out the terms is barely visible on mobile. Financial Conduct Authority guidance says information on representative loan examples must be ‘prominent’ and ‘clear’.

“The Socialist Health association is concerned about all aspects of higher interest lending, as a driver for increasing inequalities in society, resulting in poorer mental, physical and financial health for the most vulnerable and marginalised.

“Salad Money have stated they have a relationship with NHS trusts…We feel this is inappropriate, and would not want to see the NHS supporting such loans. We support credit unions.”

Cat Hobbs, Director of public ownership group We Own It told LFF: “It’s reprehensible that a time when we’re more reliant on the hard work of our fantastic NHS staff than ever, a loan company is seeking to mimic NHS branding and rip them off.

“Once again, rather than supporting the national effort and rallying round our NHS, a private company is looking to make a quick buck. Salad Money shouldn’t be allowed to get away with this and now they’ve been exposed, NHS employees won’t be falling for their tricks.”

Tim Rooney, CEO of Salad Money, told LFF: “Salad Money is a Social Enterprise and a member of Responsible Finance. We offer two loan products to NHS staff only; the first, where we are sponsored by the NHS Trust, with the repayment made via salary at an APR of 34.9%. The second product is where the repayment is made via direct debit where the APR is 69.9%.

“Our applicants have impaired credit scores where the alternative for them is either no credit or high cost credit at rates of 500% to 1,200% APR.

“We do not use NHS logos in our advertising but are explicit on our website that the products are only for NHS Trust employees.”

But Dr John Puntis, paediatrician and Co-chair of Keep Our NHS Public, said the advert was in poor taste:

“Over the last ten years, pay for NHS staff has fallen in real terms by over 10%. Many families are now facing increased economic hardship from the effects of coronavirus. It is therefore staggering to see Salad Money targeting NHS workers and offering loans with an eye watering annual percentage rate (APR) of 69.9%…

“In fact, much better loan deals are available elsewhere, for example NHS Credit Union with an APR less than a third as much at 19.6%. In seeking to take advantage of NHS workers by offering this kind of pay day loan, Salad Money’s business ethic runs counter to the spirit of national unity and support for key workers.”