The Telegraph won't get out of recent NHS-bashing that easily... 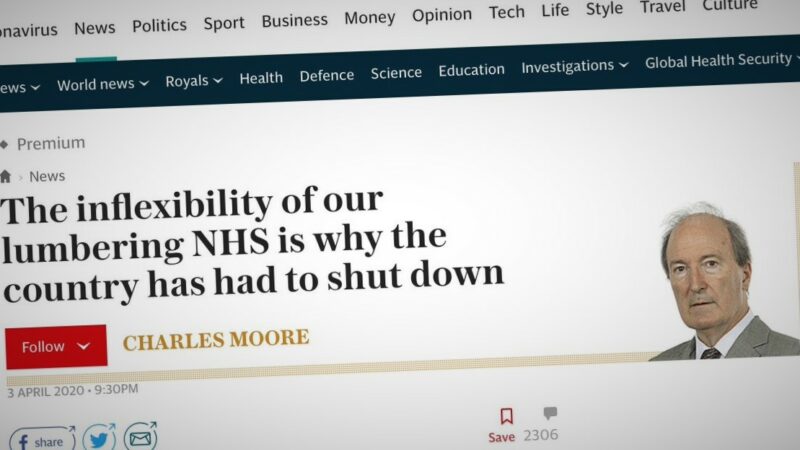 Boris Johnson’s old pals at the Telegraph have been widely mocked, after the right-wing paper offered a free subscription to NHS staff…shortly after a star columnist caused outrage for denigrating the service.

The paper – which until recently paid Johnson £250,000 a year for a column – was derided on social media over the deal. Last Thursday the paper published a piece by Charles Moore – Margaret Thatcher’s biographer – titled: “The inflexibility of our lumbering NHS is why the country has had to shut down,” a point that seemingly ignored the fact that nearly every country is experiencing a shut down.

The piece asked: “Why are we clapping the NHS?”, slamming the government’s slogan of ‘protect the NHS, save lives’. “Children are made to recite it like a prayer,” the right-wing columnist wrote.

The article was met with anger among NHS workers, with one tweet going viral calling for an advertiser boycott:

Another doctor slammed the claim that the NHS was ‘inflexible’, writing: “Inflexible? We have doubled ICU capacity in a month I went into an ICU with 14 COVID mostly ventilated patients ~30 times last week, and the nursing staff probably spent 30h in there each… I am one of thousands risking our lives The editor of the Telegraph should resign.”

Historian Dr Louise Raw wrote: “Add the Telegraph to the S*n boycott! Remember we were saying Tories would try to blame the #NHS for their own screw-ups? While doctors & nurses are DYING, Boris’ former boss Charles Moore blames them for lockdown. Which every infected country has. Remember these lies.”

A week after the outcry, the Telegraph announced they will offer a free subscription for NHS staff. In a statement, the news outlet discuss the ‘selfless hard work’ of NHS staff – in a marked contrast to their columnist:

The offer was met with derision online. Some pointed to the fact that the Telegraph’s owners, the Barclay brothers, are based offshore:

The pair ‘appear to avoid a lot of tax’ according to a Tortoise profile this March. Labour’s Margaret Hodge said: “If the Barclay Brothers are avoiding tax then they must be held to account. It simply beggars belief that billionaire businessmen that make their money in the UK continue to shift their profits offshore. These businesses rely on UK infrastructure and our public services to operate, so they should pay their fair share back into the public coffers.”

As one GP put it succinctly: “Telegraph offering a free subscription to NHS staff, as though we needed this bile as well as the high viral load.”

In a 2004 column, one writer complained Brits were paying “more and more in their taxes for this ‘unimprovable’ universal service” – backing an insurance-based healthcare system for non-essential treatment, and calling for more private care outside the NHS. Who wrote it? A certain B. Johnson.