There is a split between the 'traditional' and 'universalist' parts of Labour's coalition which is now coming to the fore, writes Zachary Hardman. 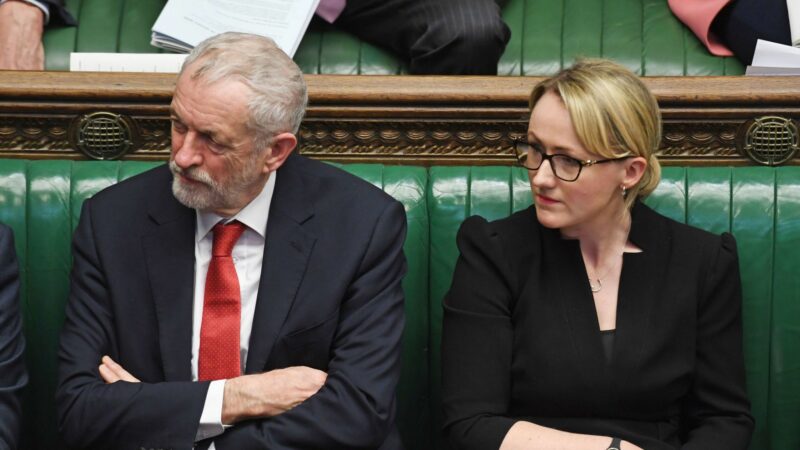 A couple of weeks ago, a picture emerged of a nine-year-old Rebecca Long Bailey presenting a bouquet of flowers to Princess Diana at the opening of an oil refinery on the Manchester ship canal where her father worked as a docker.

It drew some positive coverage in the tabloids: “Unlike her leadership rival, Lisa Nandy, Rebecca has no interest in abolishing the monarchy,” gushed the Mirror.

In the interview that followed, Long Bailey outlined her policy platform for “aspirational socialism”. But the picture itself was of much greater interest at the peak of a leadership contest framed around Labour’s response to devastating losses in its heartlands and to questions around Europe, national identity, and culture. Indeed, the picture reveals some of the fissures in the Labour Party that have now split the Corbyn coalition apart.

Long Bailey entered the leadership contest in January as the clear favourite. She was Corbyn’s presumed successor, quickly winning the backing of Momentum. But as the race enters its final stage she trails Keir Starmer, the architect of the party’s disastrous second referendum position. Indeed, recent polls indicate she will lose on first preferences alone. Why?

From the outset, Long Bailey’s policy platform has focused on two issues: reform to party democracy and a commitment to economic radicalism. These policies unite what can best be described as the “Bennite” wing of the Party.

This faction emerged around Tony Benn’s Alternative Economic Strategy in the 1970s and 80s, and campaigned across a number of issues including for a socialist economic policy and for reform to party democracy. But the third plank of its policy platform – withdrawal from the European Union – is a prism through which the divides on the left of the Labour Party can be understood.

It was not after all Corbyn’s Euroscepticism, but his anti-austerity platform that elected him to the leadership in 2015. His commitment to human rights and views on foreign policy also struck a chord with a new “universalist” politics that emerged from anti-imperialist discourses, opposition to neoliberalism, and discontentment with mainstream politics.

It was the strange magic of Corbynism that kept these two factions – Bennite and universalist – together for the duration of his leadership. But while Corbyn’s particular brand of politics united the membership, it also set him on a collision course with “traditional” voters in the party’s heartlands. This, along with the second referendum position advocated by the universalist faction, cost Labour the election.

With Corbyn out of the picture, and in the context of devastating losses in the party’s heartlands, the differences between the Bennite and universalist factions that make up the Corbyn coalition have become acute. As such, divisive questions around Europe, national identity, and culture have been much to the fore.

Long Bailey’s pitch to the membership is that she of all the candidates – working-class, Salford-born, Eurosceptic, and committed to the radical economics of the Bennite left – is best placed to win back the heartlands. She has talked of the need for ‘progressive patriotism’, couching her language in a particularly English radical history that could appeal to largely English-identifying Brexit voters.

She has also been critical of the party’s Brexit position and called for ‘pragmatism’ on freedom of movement. It is no surprise that Leave-voting Labour members are the only group she polls highest with.

Her trouble has been that, while her rhetoric may well endear her to the party’s heartlands, they do not make her more electable with party members. While a majority of members support her economic radicalism, they are more closely aligned with the universalist faction when it comes to issues around Europe, identity and culture. Keir Starmer comparatively, while cloaking himself in the mantel of economic radicalism, appeals much more to members on these issues.

This is not to say there aren’t plenty of other reasons Starmer is ahead. But as Labour responds to its election defeat, his growing support in the party is indicative.

While Long Bailey’s faltering campaign reveals how the Corbyn project has split, the likely election of Starmer shows that members don’t want the party to move closer to the heartlands on issues of identity and culture any time soon.

Zachary Hardman is a freelance writer based in London.