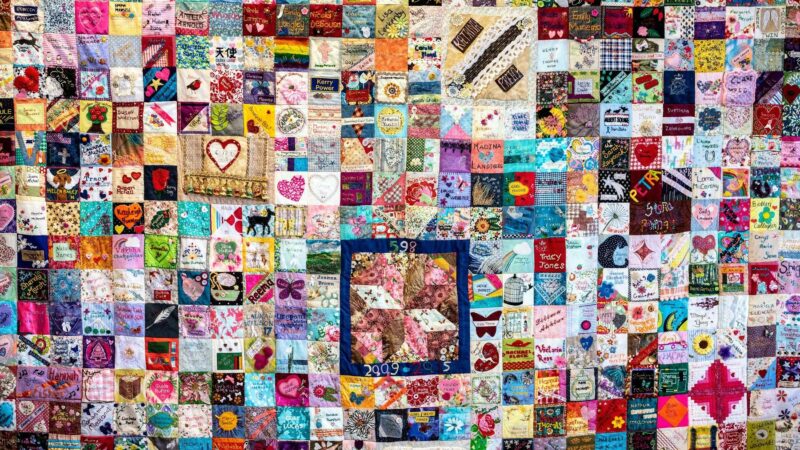 In England and Wales, 593 women were murdered by a partner or ex between 2009 and 2015. That was an average of two women a week. It was this statistic from the Femicide Census which first inspired The Women’s Quilt Project.

The Women’s Quilt was an attempt not only to portray these statistics in a visual and easily understandable way, but also to try and recentre the woman in the narrative. One of the biggest findings from the Quilt project was that when cases were reported, the focus was on the murderer, and the woman was barely a footnote in her own story.

One of the mottos of the Quilt was ‘names, not numbers’ but it could as well have been ‘stories, not statistics’.

Stories like that of Julie Ann Semper. The patch for Julie was made by Laura. Julie was a steampunk writer and a Business Studies teacher at a local college, where Laura met her.

Laura was being bullied by other students and on three occasions was on the verge of quitting college. Each time Julie talked her down and supported her in continuing with her studies. Julie played a major part in Laura getting through college and leaving with qualifications. “Our relationship was based around college, but we used to drink in the same pub after class ended!”

Julie Ann Semper’s story is unusual in that we have so much information about her. Often the only details that could be found were the gory details of the murder and information about the murderer, often neighbours talking about what a “nice man he was” and “what a good neighbour”. Many of the patches were designed based on a single scrap of information; “she was a nurse”, “her family said they missed her laughter”, “she was a good mum”, “she shone bright like a diamond”, in an attempt to create a fitting memorial.

I gathered what stories we had and told them as we took the Quilt around the country. With every visit I heard more. Friends and family came to see it, happy that their daughter, sister or mother was being remembered and commenorated and determined that we should know more about them. Women told me stories about their experiences, in many cases for the first time, and we laughed and cried together. The quilt became an outlet for long-buried emotions. One incident I remember clearly was when a woman walked from the outskirts of Sheffield into the centre with her chequebook, even though she herself was on a low income, because she heard about it on the radio and wanted to contribute to a domestic violence charity “so that other people can escape like I was able to.”

These stories came back to me vividly recently on International Women’s Day. Three years after the Quilt was launched in Parliament it has found a new home. The National Trust has taken it on long-term loan with the understanding that it will be on regular display (it’s currently at Southwell Workhouse in Nottinghamshire until November). On IWD, I sat next to the quilt and again told stories about the women commemorated by it and the people who made it.

However, since the Quilt was finished the facts have become even more stark and distressing.

On the 20th of February 2020 the latest version of the Femicide Census was released. It showed that despite a lot of hard work by people working in the domestic violence sector that the number of women murdered has risen significantly to approximately three a week.

The media are still reporting cases of domestic homicide with the victim as an afterthought and the focus on the gory details and “good character” of the killer. Meanwhile, refuges are struggling to provide support for women, mainly due to the lack of funding.

The statistics are stark:
• 64% of refuge referrals were declined last year
• The number of refuge bed spaces in England is now 30% below the number recommended by the Council of Europe.
• Only 5% of refuge vacancies listed last year could accommodate women with no recourse to public funds, and less than half had the capacity to accept women with more than two children.
• Nearly half of the service providers who responded to Women’s Aid Annual Survey 2019 were running an area of work without any dedicated funding. Of this group, 48% ran community-based services (such as outreach, floating support or advocacy) without funding, 37% ran prevention/educational work without funding, 34% ran refuge accommodation without funding and 31% ran therapeutic support services without funding.
• For services running an area of work without any dedicated funding, 74% had to use reserves to cover costs, 36% lost staff as a result of job insecurity, and 32% relied on volunteers to deliver the service.

So what can we do? Well, the Women’s Quilt Project team have decided to make another, larger quilt and are asking for volunteers and supporters to join our Facebook Group. Alongside this, we will be lobbying Parliament on the Domestic Violence Bill and promoting the work of organisations fighting Domestic Violence. We are open to offers of help, support and suggestions on where the project could next go. We hope you join us in this fight.

Roxanne Ellis is a Labour and Cooperative Councillor from Gedling.