A 'bug' in the site's anti-spam system has been removing news posts and commentary on the coronavirus crisis. 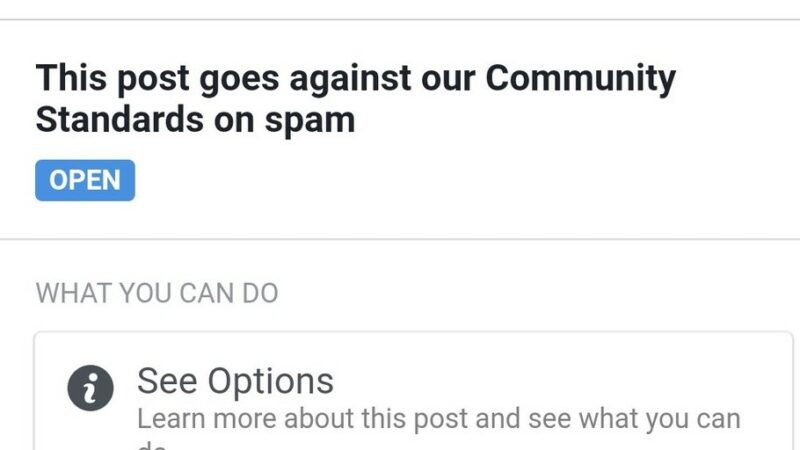 Facebook has blamed a ‘bug’ in the platform’s anti-spam system that has led to political posts and news stories about coronavirus being deleted.

But activists are concerned that the over-zealous spam filters are leading to debate being curtailed.

Facebook, Google, Twitter, Microsoft, LinkedIn, and Reddit issued a joint statement on combating misinformation on their platforms. However, as Forbes reported, sites being blocked as part of an apparent misinformation-purge include major media outlets such as Buzzfeed, and USA Today.

Guy Rosen, Facebook’s vice president of integrity, claimed on Tuesday night that the company was fixing the issues.

“We’ve restored all the posts that were incorrectly removed, which included posts on all topics – not just those related to COVID-19,” Rosen said.

However, Left Foot Forward has heard from users that many legitimate posts have not in fact been restored or are still being blocked.

And some news stories are still being blocked (as of 10am GMT Wednesday) before they are posted, such as this trade union article on hospitals:

When the same article was posted from a Facebook page, it was not blocked by the filter – suggesting Facebook’s algorithm has stricter filters for individual users than companies and organisations.

“It’s really important now to do several things. a) provide advice and mutual aid b) frame a set of political demands c) analyse where we go from here politically. [But Facebook] is limiting legitimate news.”

Another user told LFF: “One of my posts and that of two contacts (both academic researchers got blocked)…And they dare talking about free speech.” Another said they had posted a simple link to Microsoft’s news page on their Covid-19 advice – but it was removed as spam on Wednesday.

Reporters have been noting how readers have been threatened with account removal for posting factual news stories on coronavirus.

A Vice article piece by the left-wing journalist Naomi Klein was also among those that have been routinely blocked:

The piece argues companies will set out how to profit from the coronavirus crisis, through ‘disaster capitalism’ and huge government bailouts.

However, there have also been reports of an increase in non-coronavirus related content being unfairly removed, indicating the algorithm is not necessarily targeting Covid-19 related content.

Are your Facebook posts about coronavirus still being deleted/blocked? Get in touch: [email protected]