Greenhalgh has been accused of sexual harassment and of wasting taxpayers money. 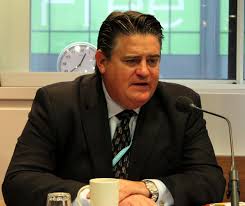 Boris Johnson has appointed a man accused of sexual harassment and wasting £311,00 of taxpayers’ money on useless water cannons to government.

In the midst of the coronavirus crisis, the government announced Johnson has made Stephen Greenhalgh an unpaid and unelected Minister of State. He will be at the Home Office and the Ministry of Housing, Communities and Local Government.

Greenhalgh was Johnson’s Deputy Mayor of Policing between 2012 and 2016. In this role, he supported Johnson’s £322,000 purchase of German water cannons for London’s police.

Water cannons have never been used on the British mainland and Home Secretary Theresa May did not authorise their use as she said they were faulty.

The water cannons were stored at taxpayer’s expense until the next Mayor Sadiq Khan managed to sell them for £11,000 in 2018.

The debacle cost the taxpayer over £311,000, which could have funded 15 junior police officers for a year.

As well as water cannons, Greenhalgh also considered buying buying “sound cannons” to use against protesters.

Also during his time as Johnson’s deputy, Greenhalgh apologised after being accused of either patting or pinching a woman’s bottom in a lift.

A City Hall investigation reported the alleged victim said “core elements” of the accusation were true. The investigation found Greenhalgh “may have inadvertently — or otherwise” fallen short of expectations.

Greenhalgh said in 2012: “I have no recollection of this event and I understand no complaint has been made. Nonetheless I would like to apologise unreservedly for anything that could be or may have been construed as inappropriate behaviour on my part.” He was not reported to the police.

Greenhalgh later ran to be the Conservative candidate for Mayor of London in 2016 but only received 864 votes from Tory members.

Zac Goldsmith became the Tory candidate but lost to Sadiq Khan. Like Greenhalgh, Goldsmith was also made an unelected minister by Boris Johnson.

Since Johnson became Prime Minister, he has appointed several of his deputies as London Mayor to national government including Kit Malthouse, Edward Lister and Munira Mirza.

Downing Street did not respond to a request for comment.