What now for fringe theatre in a time of coronavirus? 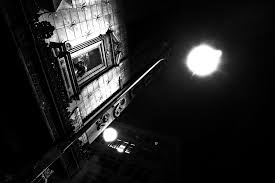 Have you ever heard of a “Ghost Light”?  For me it was one of those theatrical traditions alongside “breaking a leg” or “The Scottish Play” which people talked about but I personally never really cared for.

In practical terms, the ghost light is a theatrical tradition to leave a solitary light left on in a theatre when it goes “dark” or closes, even temporarily. While I am sure that the act itself is probably more for health and safety reasons than anything else, there’s more than enough superstition about placating the (always slightly fearsome) ghosts in theatre spaces. I think the nicest superstition about the ghost light though, really, seems to be that it’s a promise to keep the power running, to return one day soon. To bring life to the building again.

For many reasons, the coronavirus crisis has hit the performing industry in very tough ways. We learned how very quickly. As we shuttered the theatre, and began the heart-wrenching task of cancelling performances, we saw that there was likely to be a real impact on performers whose sole livelihoods in some cases rely on the ability to perform in crowded spaces. The threat not just to theatre creatives, but also a whole industry of brilliant people whose lives centre on theatre spaces themselves, hangs by a thread for most, living from one pay check to the next or from one performance job to the next. Working zero-hour bar jobs or casual teaching positions to pay the rent gets them by most of the time – so what do you do when the bars get closed or the teachers send children home from school?

It remains to be seen whether the measures announced by the Chancellor this week for the self-employed will allow those performers to continue to survive as long as this particular crisis continues (and its looking likely we’re in this for the long haul, whatever it is). But what else has become clear though is that this situation does allow fringe theatre in particular to do what some other industries cannot easily do and that is to play to one of the things its always been good at. The ability to perform, to rally and to improvise with limited resources and maximum creativity even under the most difficult of circumstances.

Technology allows us to collaborate virtually, to keep writing, challenging each other and to keep the momentum of producing new work alive. I’m pretty sure we’ll see some really brilliant pieces of work next year as a result of this process of creatives all having time to think and to plan their next projects. We’re already seeing theatre spaces make their past catalogues of plays and performances available for new audiences to discover and we’re seeing creatives use their focus, skill and determination to continue to create work to keep us going through some tricky times. In our confinement, we turn to artists, to online video platforms like Amazon or Netflix, to the creation of content to fill the days, and it is that “glimmer” of creativity which allows us to stay at home and protect our valuable and vitally important NHS.

My hope, most importantly, out of the current situation is that we’ll discover a new-found kindness for each other. Maybe that’s an optimistic hope, but it’s one I can get behind. We’ve swapped the same applause we share for actors and performers now for the brilliant members of our NHS and other public services, and there has never been more prominence for the work done by those in our society who keep it running such as supermarket staff, cleaners, delivery drivers and those doing other essential jobs. Maybe when all this is over we’ll be able to do their story justice too.

So back to the ghost light, then, that symbol of keeping theatre alive. At our theatre, we didn’t turn a practical light on, because maybe it isn’t really a tangible “thing” after all. Maybe it’s so much more than that solitary light left on at the back of a stage in a darkened performance space. It’s a commitment that performers and creatives (and every member of a theatre community) make to each other that despite the challenges that may exist in the world, there will always be an outlet for creativity, storytelling and for community which fringe theatre spaces bring.

It’s also a promise that when this lockdown or whatever we’re calling it is over, (as soon as it is over) there’ll be museums open for business, cafes and pubs bustling with people again, parks and playgrounds full of children laughing and stories being told, all over this brilliant country we live in from theatres and all sorts of other places. Although you may argue that we were really never away in the first place.

What this crisis has taught us though, is that there is a clear need for enhanced protections in place not only for our underfunded welfare state, but also but continued protections for arts and performance programmes as well as those people working in industries whose livelihoods this situation has illustrated hang by the finest of threads. These measures for those people on zero-hour contracts, as well as cuts to our woefully underfunded NHS must be something that we revisit and improve once this situation comes under a degree of control.

David Brady is a critically acclaimed and award-nominated writer and director from Coventry based in London. David is Artistic Director of Proforca Theatre Company and the Lion & Unicorn Theatre in Kentish Town.