The council was looking at cutting the pay of some of its lowest-paid workers. 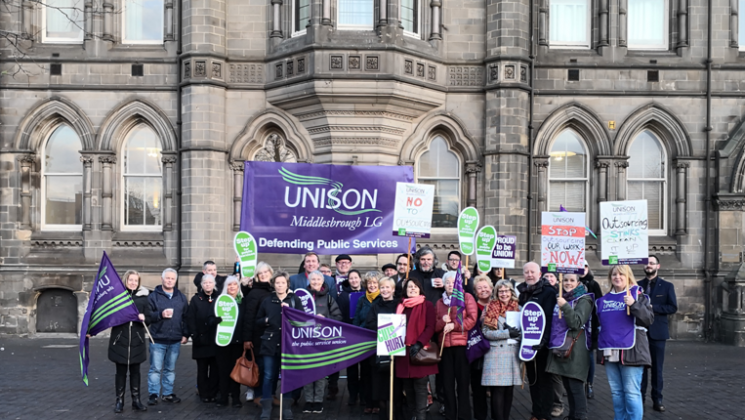 Pressure from trade union Unison has stopped Middlesborough Council from outsourcing its 140 cleaners to a private firm.

The council, which has headed by a group of independents, was considering outsourcing the cleaners in order to save money as its funding from central government has been slashed.

However, cleaners represented by Unison and supported by the opposition Labour group of councillors, protested against these proposals, claiming their pay and conditions would be driven down.

“These outsourcing plans were morally indefensible and little more than a legal way to cut the wages of the council’s lowest-paid employees in future.

“Unison will now work with councillors to find a way of delivering a modern cleaning service with new ways of working that avoid outsourcing these roles unnecessarily.”

“The council has been persuaded by the moral pressure applied by Unison and the Labour group of councillors. These low paid, predominantly female workers will now continue to be protected by nationally negotiated wages, and fair terms and conditions. They will also remain in the Local Government Pension Scheme (LGPS), ensuring they can afford to retire when the time is right for them.

“All along, Unison has been asking the independent-led council to consider keeping these cleaners in house using new ways of working and more efficient equipment to deliver savings.

“The cleaning staff should always remain part of the council – not sold off to profiteering private companies.”

“We have been working and campaigning with our Trade Union colleagues to secure the rights and working conditions of our cleaners and this is a big victory for our approach.

Labour Councillors have made it clear from the start that in our budget negotiations workers’ pay, pensions and conditions were one of our top priorities and with the Mayor accepting our demands over no move to fortnightly bin collection, no removal of school crossing patrols and no reduction in street sweeping and grass cutting services we have managed to deliver a budget that protects local workers and key local services.”