The climate debate belongs to all of us - and we'll solve it together, writes the New Economics Foundation's Fernanda Balata. 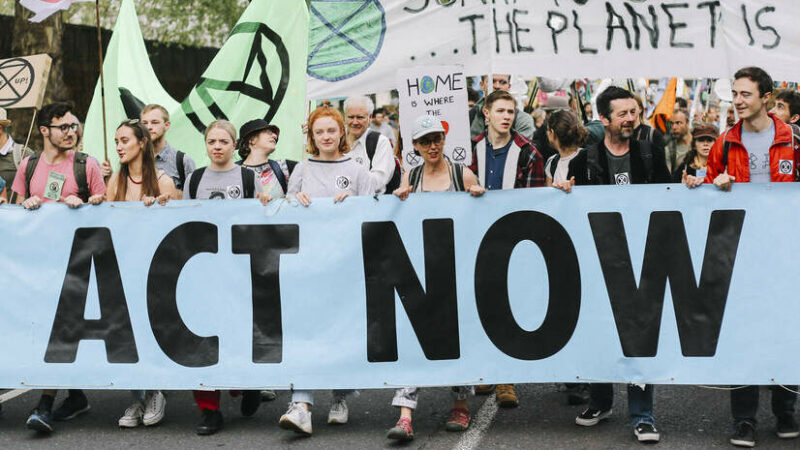 Tens of thousands of young people are taking to the streets around the country today, desperate for their voices to be heard as they demand action on the climate crisis. The school climate strikes are back.

This will surely be the first of many civil mobilisations in 2020, with the UK hosting a crucial climate conference at the end of the year. But without a formal say, or the legitimate power of influence in what governments and businesses actually do, these voices remain frustrated by a failure to act.

Last month, two very interesting meetings took place to discuss the climate crisis. One was a male-dominated summit, in a Swiss mountain resort, gathering some of the greatest polluters and richest people in the world in an exclusive meeting that can cost nearly fifty thousand pounds to attend.

The other, was one of a hundred people, gender balanced, representing all corners of the UK; from young students to retirees; from an engineer to a doctor, a teacher and a care worker. They gave up their weekends to develop recommendations for government on how to deliver their net-zero emissions target by 2050. You have probably heard about the first one – the famous World Economic Forum that takes place in Davos every year. But did you know about the UK’s first Citizens’ Climate Assembly, which met for the second time last weekend?

What gets discussed in Davos has had international and political resonance for years. Its recommendations are taken seriously and continue to shape and influence our economy, even though it only represents the interests of very few people in society. The Climate Assembly, which has just taken its first baby steps, has already been criticised over the fact that their recommendations to be presented to parliament in April won’t be legally binding. To me, there is a question of whose voices and which processes we choose to legitimise in our society.

I was honoured to attend the first day of the assembly last month. Its members asked dozens of extremely important – and often tough – questions that go right to the heart of what any policymaker must be seriously considering. Beyond the technical measures to decarbonise the economy, attendees asked: “How can people in poorer communities eat healthier alternatives that are way more costly for them?”, or “now that we’re leaving the EU, is this an opportunity to change farming subsidies away from meat production?”. They asked “who is advising the government on this?”; and “if we try to tackle climate change and economic redistribution at the same time, are we making it unsolvable?”, among much else.

Assembly members get to tap into lots of expert knowledge in a range of topics during four weekends until the end of March. That is really not much different from the process that our elected representatives go through. But the assembly’s final recommendations will no doubt reflect the wide range of experiences and knowledge within the group – an invaluable but too often neglected part of policy-making, and of finding solutions to the biggest challenges we face as a society.

The diversity of voices and perspectives brought together at the climate assembly is a great way to go about answering how we deliver trust in the transition to a post-carbon world. In a country scarred by unmanaged past industrial transitions – such as the closure of coal mines in the ’80s and the decline of fishing activities in many coastal communities – the main challenge for policymakers is not climate policies, but how fair climate policies are and are perceived to be.

They can’t answer this on their own, because fairness is in itself something that must be democratically shaped and felt. Everyone will be affected by climate policies, but they will not impact everyone the same way.

No one single thing will be able to tackle the scale of the climate emergency but the number of citizens assemblies growing across the country – like the one in the borough of Croydon in London, whose recommendations will feed into the Croydon Climate Crisis Commission – could be key to addressing this challenge faced by policymakers whilst restoring people’s faith in democratic processes.

Young people understand that the lack of trust in society is a barrier for action on climate. The big decisions that affect all of our lives can no longer be done behind closed doors, at exclusive events or through the exchange of favours, positions and cash. The climate movement has demonstrated the influence we can have when we raise our voices as a collective.

Now, it’s time to bridge that gap between climate activists and ordinary people, between young and old, North and South. The climate debate belongs to all of us and it’s great to see more people around the country engaging with it.