Keep Our NHS Public is holding a winter crisis Day of Action on Saturday. Here's why. 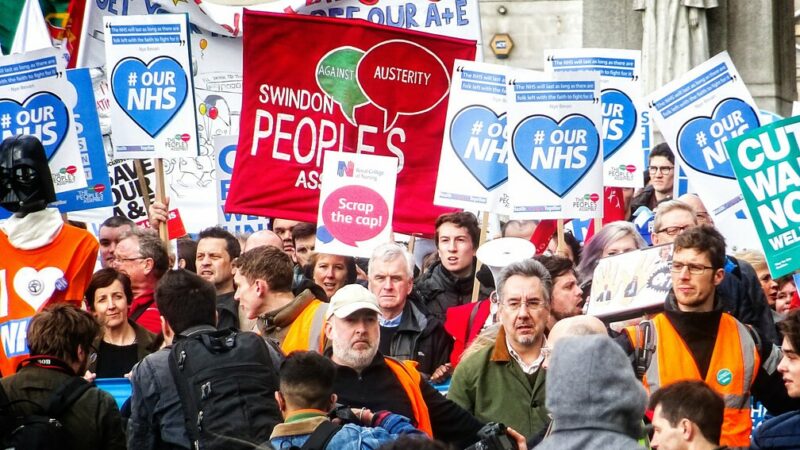 The new NHS monthly figures paint a predictably bleak picture of the effect that a decade of government underfunding and 100,000 staff vacancies have had on our health service.

After the previous month’s figures detailing the worst results ever, we find that in December over 332 people had their urgent operations cancelled – several for the second time. Added to that ‘there were 100,578 four-hour delays’ from the decision to admit to getting a bed in December month, which compares to 83,554 in the same month a year before. In practice this means that more patients are having to wait on hospital trolleys or be seen in corridors waiting for admission onto a ward.

This is the highest level of four-hour delays from decision to admit to admission since records began: ‘Of these, 2,846 were delayed over twelve hours which compares to 627 in the same month last year.’

Behind these never-ending statistics are real people. Patients waiting in fear and pain for treatment, and NHS staff desperately trying to help them, but increasingly being set up to fail. As has been famously asserted: “The NHS isn’t failing – it’s being failed.” There is still much to fight for and campaigners and staff should not give up hope. However, the real challenge lies in alerting the public to the lack of substance behind the government spin in order to turn the tide against them, exerting pressure to force meaningful and lasting change.

Both NHS staff and campaigners are tired of empty promises. We are tired of the dishonesty and the manipulation of the truth that emanates from this government like breathing; tired of the word ‘extra’ having lost all meaning.

The government’s funding plan announced for the NHS is far less than it needs, far less than other countries receive and fails to account for the last decade of sustained underfunding.

The Conservatives are promising the NHS an impressive sounding £33.9bn by 2023/24. But research by the Health Foundation concludes that this figure does not account for the effect of inflation and includes money that has already been spent.

According to the Health Foundation, after these factors are accounted for the real total the NHS will receive up to 2024 will be just £16.7bn. This figure will barely allow the NHS to tread water and crucially there is no reparation made for social care, NHS infrastructure or public health which has a massive impact on the ability to deliver frontline services.

Similarly, the government’s claims about 50,000 ‘extra’ nurses turned out to be only 31,000 with the rest being existing nurses already employed, and the 40 new (or ‘extra’) hospitals translates to just 6 that are due to receive adaptations by 2025.

Understanding that there is public dissatisfaction in this Conservative neglect of our NHS, Keep Our NHS Public have launched a Winter Crisis National Day of Action at over 20 venues across the country this weekend. These actions will take the form of demonstrations, rallies, marches, and street stalls to raise awareness of the now tragically normalised crisis in our NHS.

During the recent election campaign, the Conservative government attempted to rebrand itself in hideous irony as ‘the party of the NHS’. Sadly, there were many that, despite all evidence to the contrary, swallowed their well-packaged lies.

It is now incumbent on us as NHS campaigners to draw attention to the truth as never before and crucially to make sure that those struggling every day in an underfunded and understaffed system are not forgotten in the midst of political point-scoring.

Holding governments to account is what Keep Our NHS Public has been doing since its conception 15 years ago, and we will continue to strive to this end until there exists a well-funded, well-staffed publicly owned and provided healthcare system for all of us.

Samantha Wathen is the Press and Media Officer for Keep Our NHS Public, a cross-party organisation that campaigns against cuts, closures and privatisation of the NHS.