Supporters of the Australian activist are free to defend WikiLeaks - but they must stop dismissing rape allegations. 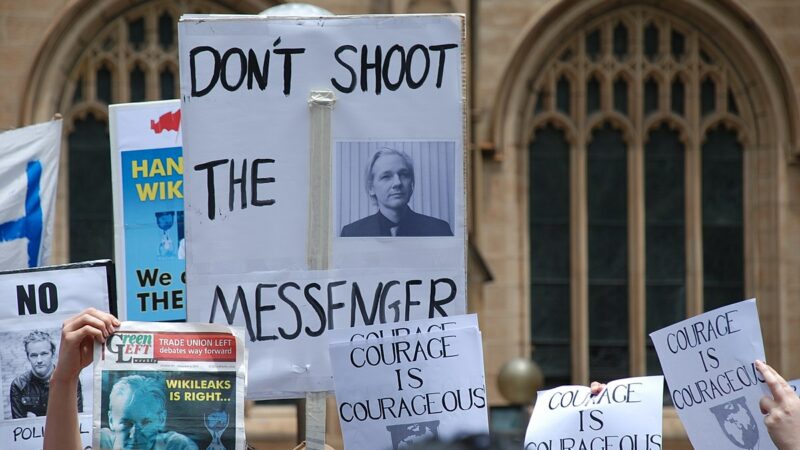 This Saturday will see celebrities and crowds gather in central London to offer their support for Julian Assange, ahead of his court trial next week.

The WikiLeaks founder is due to face an extradition hearing that will determine whether or not he will face espionage charges in the United States, which could see him face decades behind bars for publishing the Iraq and Afghanistan war logs.

Others will gather outside Belmarsh Prison next week, calling for the release of Assange from a prison sentence that his supporters are claiming amounts to “psychological torture”,

Yet few will comment on why he is there in the first place: skipping bail to avoid facing rape charges in Sweden.

While the relatively recently formed Don’t Extradite Assange campaign organising a number of the protests will also make the case that Assange is a victim being pursued by imperial powers, little has been said about the activist’s alleged victims.

This refusal to mention the sexual assault allegations against Assange in context with his
plight is the latest manifestation of rape apology used in the defence of the hacker. The
latest to ignore the allegations is former Shadow Chancellor John McDonnell MP, who wrote on Twitter: “The establishment is out to victimise an innocent,” leading one feminist campaigner to respond: “You f*cking kidding me? We know how safe to feel round you & your friends then I guess.”

This refusal to mention the sexual assault allegations against Assange in context with his plight is the latest manifestation of rape apology used in the defence of the hacker. Here are some of the arguments you might hear being used:

1. ‘Charges were never made’

A common myth propagated by Assange supporters is that the sexual assault “charges have been dropped”. Australian filmmaker John Pilger went as far as calling for UK and Swedish prosecutors to be charged with perverting the course of justice for attempting to extradite Assange to Sweden to face sexual assault charges, last November at the launch of a book defending Assange. This was as the “allegations had been folded up for the third time” in nine years and had been “shelved”, he claimed. This is simply untrue.

As Assange failed to answer sexual assault charges in Sweden, the statute of limitations on charges of sexual molestation and coercion expired in 2015, but the statute of limitations on the rape charge doesn’t expire until August this year. While the investigation into the rape case was reopened and then discontinued last year by Swedish prosecutors, the reason given was that oral evidence had weakened over the nine years since the incident and the prosecutor made clear she still thought the claims were “credible”.

Quotes from UN Special Rapporteur on Torture Nils Melzer have been widely shared in recent weeks in which he vaguely insinuates that the original allegations from Assange’s accusers never amounted to rape in the first place.

While it is unclear exactly what the wording of the allegations made was (because there has never been a court case to scrutinise them), the defence sounds suspiciously similar to those made by former Labour and Respect George Galloway in 2012. In comments that were later lambasted, Galloway made the claim that ‘stealthing’ and having sex with somebody while they were asleep was not rape, just merely “bad sexual etiquette”, in a video blog he self-published (starts 10.29 min).

3. The sexual assault charges are ‘irrelevant’ to the current case

This claim might be a bit more credible, if Assange supporters hadn’t been making this argument back in 2012 when the entire campaign focused on stopping Assange being extradited to Sweden to face sexual assault charges.

Assange’s current incarceration in Belmarsh is part of a 50 week sentence he received for breaching bail conditions to avoid being extradited to face sexual assault charges in Sweden.

4. ‘But the revelations Assange made are what matters!’

Earlier this month Melzer called on supporters to “refuse to discuss the personality of a man who has done more than his fair share for society,” at a rally, and claimed the press had focused on “absolutely trivial things compared to the revelations he made”. These thoughts were echoed by journalists Tim Dawson and Roy Greenslade.

While being careful to not single out the sexual assault allegations as ‘trivial’, the message is clear that the allegations of sexual violence are not deemed worthy of discussion by many of those who back Assange.

The case has been built that Assange is the victim of an unbalanced and unfair legal system hellbent on punishing him for shining a light on the immorality of poweful Governments, and perhaps he is. But the next time somebody is bemoaning the injustices faced by the man, consider how his actions have ensured that there are still two women who will never get their day in court.

Hannah Flynn is a health journalist who has written for The Guardian, Vice, Ars Technica, Nursing Standard and TES.