Trump and Boris Johnson are two sides of the same coin. 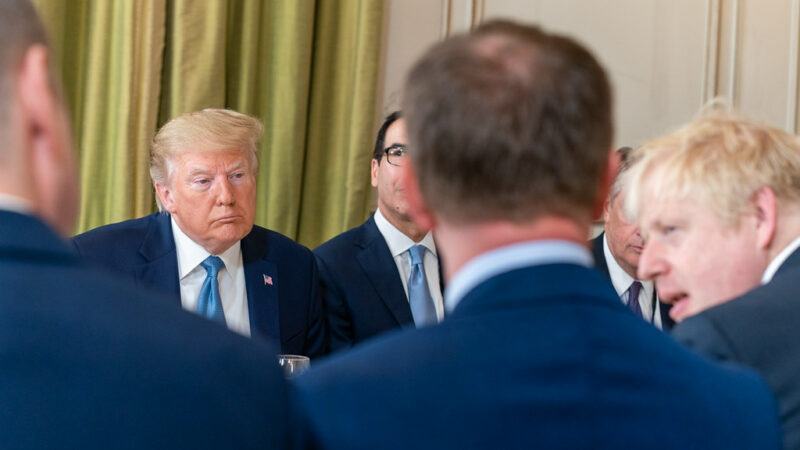 The Conservative administration led by Boris Johnson is the most authoritarian and right wing in living memory.

Whenever it does not get its way, it threatens to close and destroy the institution concerned. Lies, smears and deceit have become the common currency of political discourse. That’s what we’re up against.

The latest evidence came after yesterday’s Channel 4, a state-owned entity, debate on climate change. Ahead of the 12 December general election, leaders of all major political parties were invited to participate. Boris Johnson declined to participate. At the last minute, Michael Gove, Chancellor of the Duchy of Lancaster, was sent. As it was a leader’s debate, Gove was denied participation.

The immediate response of the Conservative administration was to threaten Channel 4. A spokesperson for the administration said “If we are re-elected we will have to review Channel 4’s Public Services Broadcasting obligations”. The message to Channel 4 executive is clear; you obey or face unpleasant consequences. (It’s a message that has strong echoes of Donald Trump).

This, of course, is not the first time that the Johnson led administration has trampled upon institutions. In the face of deep scrutiny of his Brexit policy, Prime Minister Johnson silence critics by proroguing parliament for the period from 9 September to 13 October, an unusually lengthy period in peace time.

In an unprecedented judgement by a panel of 11 justices the Supreme Court ruled that the prorogation was unlawful. The right-wing press dubbed the judges “enemies of the people”, subjecting them to personalised vitriol. The Conservatives manifesto now seeks to ensure that judges will be political appointees.

Twenty-one leading Conservative members of parliament, including former ministers, objected to the government’s strategy over Brexit. They are all immediately banished from the Party.

The general election campaigns have always had their share of spin and bluster, but the Conservatives have plumbed new depths in the 2019 campaign. Lies, deceit and smears have become the common practice. The Party doctored a TV interview of opposition politician Keir Starmer to show that he was dithering, whilst that was not the case.

The Conservative Party doctored its Twitter page to give a misleading impression that the site was somehow an independent fact-checking site. When Twitter accused the Conservatives of misleading the public, a spokesperson replied, ‘no one gives a toss’.

Labour was the first major party to publish its manifesto for the 2019 election. It promised to revive the UK economy through public investment and also sought to redistribute income/wealth. The Conservative response was to set-up a fake website labourmanifesto.co.uk and paid Google to ensure that it appeared towards the top of its results for people searching for the Labour manifesto. The fake website provided deliberately false and misleading information.

Then there is a daily diet of smears and lies, amplified by the right-wing press and social media to demonise politicians presenting an alternative vision of society.

The Conservative slogan of ‘Get Brexit Done’ is repeated incessantly even though everyone knows that Brexit debate will last for a generation or more. The truth is that under the first-past-the-post system a party can win majority in the House of Commons without receiving most of the votes.

This means that majority of the electorate does not support its stance on Brexit, assuming that it is the main issue. Even if another referendum is held the outcome is likely to be close and the losing side is unlikely to give up its quest for its preferred version.

The right-wing media, owned by large corporations and wealthy individuals, has portrayed the European Union (EU) has some kind of colonial occupying power and Brexit as some kind of an independence. It fails to mention that not a single law/rule has ever been imposed upon the UK by the EU because they require unanimous approval from all member states. Still, the nationalistic fervour is advanced and little attention is paid to the negative economic and social consequences.

There is also little scrutiny of the leading Conservative politicians. The parliamentary voting record of Boris Johnson shows that he voted against laws to promote equality and human rights, smoking and hunting bans; voted against a right to remain for EU nationals already in living in the UK; voted against paying higher benefits for those unable to work due to illness or disability; against higher taxes on banks; for anti-trade union laws; voted against removing hereditary peers from the House of Lords and also against measures to prevent climate change.

A scrutiny of the voting record of other leading Conservative politicians, such as Michael Gove and Jacob Rees-Mogg should fill people with trepidation, but media has shown no interest in that.

The UK seems to be heading into a dark future and too many people sedated by doses of lies, deceit, vitriol and nationalism do not care. People can change that future by booting the Conservative administration out of office on 12 December.

5 Responses to “Prof Prem Sikka: Boris Johnson is leading us into an authoritarian disaster. Don’t let it happen”