No party's hands are clean when it comes to telling porkies... 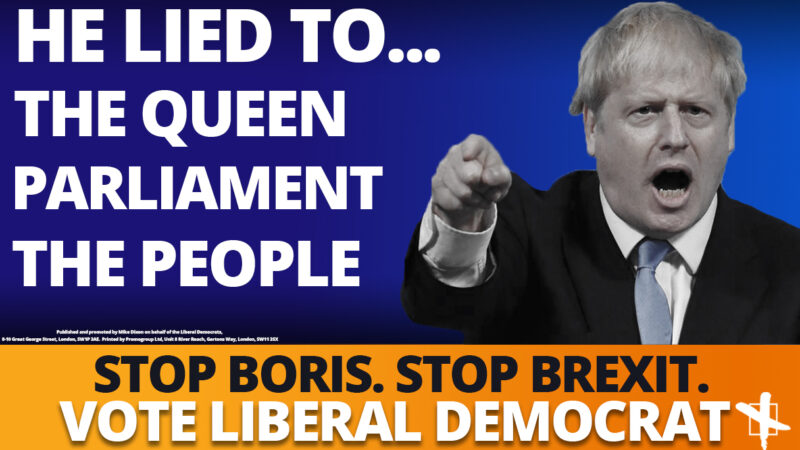 The Liberal Democrats have unveiled a poster attacking Boris Johnson for lying to the ‘Queen, Parliament and the people’.

The allegation stems from Boris Johnson asking the Queen to prorogue Parliament for five weeks, apparently in order to pass a Queen’s Speech. But the Supreme Court ruled that the real reason was to ‘stymie’ the work of Parliament.

Another Lib Dem poster shows Boris Johnson flanked by Donald Trump and Nigel Farage, stating: “Brexit is good for them, how is it for you?”.

The posters were launched in London this morning on four poster vans, which are touring Conservative/Liberal Democrat marginal seats that could deny Boris Johnson a majority.

But the Lib Dems have come under fire for their own misinformation during this campaign.

Former Tory Sam Gyimah – now the Lib Dem candidate for Kensington – recently accused the current Labour MP Emma Dent Coad of being “part of all the discussions that went on in terms of cladding” with regards to Grenfell Tower when she was on the council.

But Dent Coad joined the board of the tenant management organisation for Grenfell in June 2008 and left in October 2012 – before planning applications for the refurbishment of the tower or ‘any discussions about its substance’ took place. Dent Coad has reported Gyimah to the police for what she termed a ‘lie’. Gyimah has refused to retract the comment.

“Boris Johnson and his backers Nigel Farage and Donald Trump may stand to benefit from Brexit, but it is families across the country who will suffer.

“Now he is trying to dupe the public into believing that voting for him will make Brexit go away. This is the biggest lie of all and it must be challenged head on. His disastrous Brexit plan would mean years more uncertainty and damage to our economy, NHS and public services.

“Liberal Democrats have shown that we can stop Boris, stop Brexit and build a brighter future, by taking seats off the Tories across the country.”

A party spokesperson told LFF the vans would be touring:

The party clearly think their broken promise on hiking tuition fees is but a distant memory. Students may not agree…

One Response to “Lib Dems launch posters attacking Johnson for lying. But what about their own fibs?”