Tory HQ has warned its MPs not to sign the petition against the NHS being a subject in US trade talks. 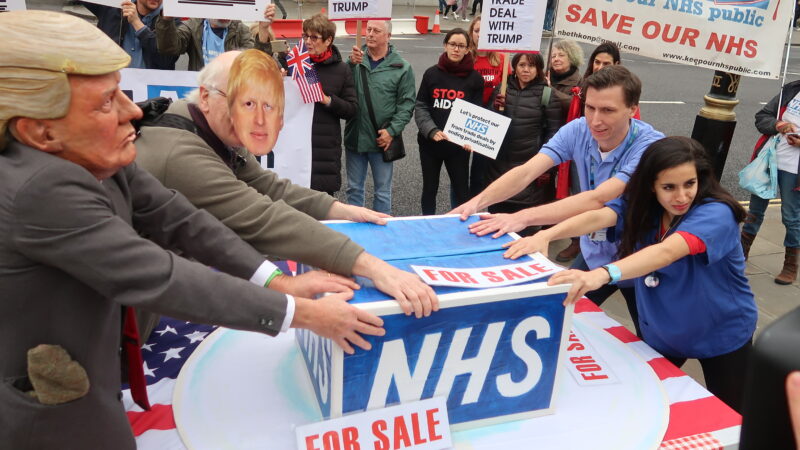 A coalition of NHS campaigners staged a demonstration in Parliament Square calling for the NHS to be taken “off the table” in a trade deal with the USA.

The campaigners, led by Keep Our NHS Public and We Own It, want to end privatisation in the health service and restore it to a wholly publicly owned and provided service.

At the event, Boris Johnson was invited to physically take the NHS off a table draped in an American flag.

Protesters dressed as Boris Johnson and Donald Trump carved up the NHS with a giant knife and fork and fought with NHS doctors trying to protect it.

Campaigners claim that the NHS cannot be protected from a trade deal without ending privatisation.

They argue that as long as private companies are able to compete for NHS contracts, the health service will automatically be ‘on the table’ in any future deal.

“This election has highlighted issues of trust and truth. ‘Dispatches’ exposed what Johnson’s team is planning behind closed doors between the UK and US trade departments and US Pharma.

“We are exposing another lie on Monday: Johnson will not and cannot keep the NHS off the trade deal table when up to 18% of NHS funding is already commercialised. We demand that the Government protects the NHS by restoring it to a wholly Public Health Service.”

“Concern for the NHS is front and centre of this election campaign. And the public don’t want to see it sold off as part of a trade deal with Donald Trump. The only we can prevent that is to end privatisation and ensure that the NHS is a fully public institution. Otherwise, the NHS will be automatically on the table in any trade deal with the US.

“It’s absolutely vital that Boris Johnson joins other leading politicians – including Jeremy Corbyn, Liz Saville-Roberts and Caroline Lucas – in pledging to take our NHS off the table once and for all by ending privatisation.”

The demonstration comes as over 30,000 members of the public have written to their MPs and parliamentary candidates calling for the NHS to be protected.

As a result of the campaign, more than 160 parliamentary candidates or former MPs have so far committed to protect the NHS from trade deals by ending privatisation.

Multiple candidates and former MPs from Labour, the Liberal Democrats, the Green Party, SNP, Plaid Cymru, as well as some independents have signed the pledge. No Conservatives have yet signed.

Over 900,000 people have also signed a Change.org petition calling for the NHS to be kept out of trade deals – launched started by NHS doctor and member of Keep Our NHS Public, Sonia Adesara.

In October, a poll carried out by Survation, found that the public don’t believe Boris Johnson’s claims that the NHS is not “on the table”.

Additionally, the poll found that 57% of people are either “very concerned” or “quite concerned” about the impact a trade deal with Donald Trump could have on the NHS.

The poll also showed that the overwhelming majority of the public don’t want the NHS included in any trade deals with any other country.

71% of people said they didn’t think the NHS should be included in trade deals, compared to just 16% who said that they did.

Survation also asked people which parties they trust to ensure the NHS is a publicly funded and publicly run institution.

Just 18% said they trusted the Conservative Party, compared to 31% for Labour – the highest for any party.