Lawyers for XR say the ban is a 'disproportionate and unprecedented curtailment of the right to free speech and free assembly'. 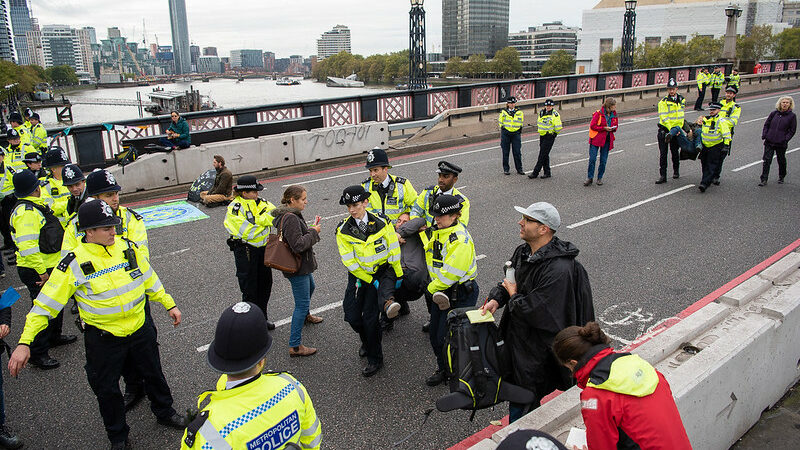 Lawyers for Extinction Rebellion (XR) have submitted are requesting a judicial review to challenge the Metropolitan Police’s decision to ban XR protests in London.

Lawyers for XR say the ban is a ‘disproportionate and unprecedented curtailment of the right to free speech and free assembly’.

The Public Order Act 1986 states that “[police] may impose conditions as appear necessary to prevent serious disorder, serious damage to property or serious disruption to life of the community”. It appears that the Met’s ban is grounded on the ‘serious disruption’ point.

But lawyers for Extinction Rebellion argue that the all-London ban is so broad that it threatens freedom of expression and assembly: “Any [protest rules]…imposed must be clear, precise and capable of being understood and applied by those to whom it is directed. They should leave no doubt as to what assemblies are no longer permissible & what are.”

They add: “[The ban] purports to apply to all assemblies ‘linked to’ the Extinction Rebellion ‘Autumn Uprising’, without clarifying what constitutes such a ‘link'”.

XR say the Met’s current protest ban means it is currently illegal for two Extinction Rebellion protesters to stand next to each other in the whole of London. “The condition imposed is wholly uncertain and irrational,” they note.

A full judicial review application seen by Left Foot Forward draws on a European Court ruling, which noted that: “Any measures interfering with freedom of assembly…other than in cases of incitement to violence or rejection of democratic principles…do a disservice to democracy and often even endanger it.”

The application argues that the Met ‘could and should have imposed lesser measures’ – short of a blanket ban – on the movement.

Extinction Rebellion hopes that the High Court will quash the decision to implement the blanket ban tomorrow, stopping the criminalisation of protest against the climate and ecological emergency.

The applicants for the judicial review will find out later today whether a High Court judge will hold a hearing to consider it.