This Friday's global walkout is expected to be bigger than ever. 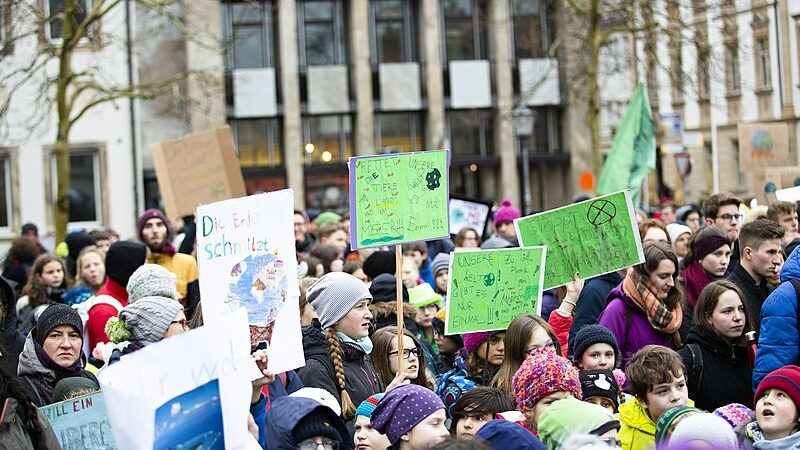 Pic: A ‘Fridays for Future’ protest in Germany.

Trade unions are throwing their full weight behind the youth climate strikes taking place in Britain this Friday, for the first time.

A motion passed at the Trade Union Congress conference in Brighton last week called on all workers to take part in a 30 minute ‘solidarity’ action and join the young protesters. While the TUC stopped short of calling for (illegal) strike action, workers will join protests at rallies across the country around midday.

Jake Woodier, an organiser for the UK Student Climate Network, told LFF he expected this Friday’s actions to be “much bigger than before”. “There are more demonstrations than ever, with significant union backing.”

He called the endorsement of the TUC – which represents over 6 million workers in the UK – a ‘significant stride forward for the movement’.

A statement from the TUC said: “We will support the fight against climate change to help protect the planet for our children and grandchildren as well as stand up for workers whose jobs are at risk.

“We need to take action to make the transition to a greener economy a just one that puts working people at its heart. Restrictive trade union laws make it very difficult for workers to go on strike but union members will be out and campaigning in their workplaces.”

Lecturers’ union UCU welcomed the move and called for more colleges and universities to make allowances for their staff to get involved in Friday’s protests. Goldsmiths University staff are among other universities to have backed a 30 minute stoppage for workers to show their support for the action against climate change.

This Friday marks a shift, with “an explicit call for adults to join in the actions, where that hasn’t been prevalent beforehand,” Woodier added. “This is the time for all of us need to step up.”

The TUC support comes as new analysis by a group led by former UN Secretary-General Ban Ki-Moon says the planet urgently needs to be made more climate change resilient, and richer countries need to invest in adaptation measures that will benefit the world.

Civil servants’ union PCS, the bakers’ BFAWU, and the largest teacher’s union the NEU are all backing the actions, among others.

The GMB union – one of the largest in the UK, with many members in the fossil fuel industry – has previously been seen as slow to move on climate change, but the union has now called for a Green New Deal for workers – a key demand of protesters.

“The trade union movement is fully behind the actions against the climate crisis.

“The work done by Greta Thunberg and school students around the world has been inspirational and now it’s time for the rest of us to make our voices heard.”

A full list of the student actions is available here. Union members are also taking action through the TUC’s member unions – see here.

LFF is a member of Covering Climate Now, a coalition of hundreds of media organisations across the world dedicated to increasing coverage of the climate crisis.