This movement is about to step up a gear. 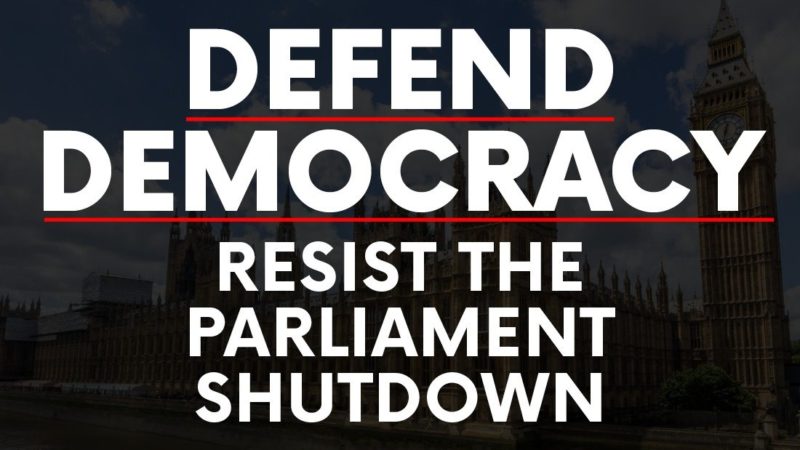 Hundreds of thousands are expected to protest across Britain this Saturday, following Boris Johnson’s move to shut down Parliament for over a month.

It comes as MPs pledge to occupy parliament as constitutional crisis intensifies.

‘#StopTheCoup’ Organisers say that mass civil disobedience and disruption on the cards, with over a hundred trade unionists calling for strike action.

Protests this Saturday are expected from Aberdeen to Plymouth, with at least 26 organised across the country so far. In London, crowds will gather from 12 noon in front of Downing Street.

The protests follow demonstrations called on Wednesday evening in response to the suspension of parliament, with many thousands turning out at just four hours’ notice.

Crowds blocked bridges and streets, and heard from speakers including Diane Abbott, John McDonnell, Paul Mason and more. Saturday’s protests are expected to be much bigger. Over 1.5m people have already signed a petition opposing prorogation.

Labour frontbencher Clive Lewis MP has said that he will have to be “dragged out of the chamber” if Boris Johnson wants to shut down parliament to push through his Brexit plans.

“We believe our unions, the Labour Party, and the whole working-class movement must urgently mobilise direct action, including protests, strikes, and occupations, in opposition to this development.”

Thousands have also signed a pledge which states: “If the government tries to drive No Deal through by stopping parliament from sitting, we cannot just rely on the courts and parliamentary process. We need a massive movement of resistance, with marches, civil disobedience and protests in every corner of the country.”

“These moves are utterly outrageous. If Boris Johnson thinks he can suspend parliament and force through No Deal he has another thing coming. We will build a mass movement to save democracy, and everyone who wants to stop this travesty must get ready to mobilise, demonstrate and resist. MPs, too, will have to play their part. They’ll have to drag me out of the chamber.”

Michael Chessum, national organiser for Another Europe is Possible, said:

“We are witnessing the birth of a huge movement to fight for democracy and oppose Boris’s Brexit agenda. It’s uniting the anti-Brexit movement, the left, the labour movement, the climate strikers and many people just outraged at Johnson’s attempts to shut down parliament. The crowds are angry, energetic and hopeful, and are taking matters into their own hands. We aren’t here to ask Boris nicely, we’re here to force him to back down. That means civil disobedience and being willing to disrupt things.”

Three legal cases are currently proceeding through the courts intended to stop prorogation. But #StopTheCoup organisers say litigation cannot be relied on.

Nadia Whittome, a Nottingham Labour activist and spokesperson for Another Europe is Possible said:

“We are now seeing the true meaning of Brexit – it is a project aimed at nothing less than the destruction of what little democracy we have.

“If they are prepared to shut down our democracy to deliver Brexit, their intentions for after they succeed will be even worse…Everything is at stake, and we can’t just rely on judges or MPs.”

Remain group Tech for UK say there are around 60 protests planned in total in the coming days:

Here are the protests on ONE day –

See you in the streets…

16 Responses to “#StopTheCoup: Full list of protests as hundreds of thousands expected to march”