Johnson's desperation for trade deals could get in the way of climate efforts. 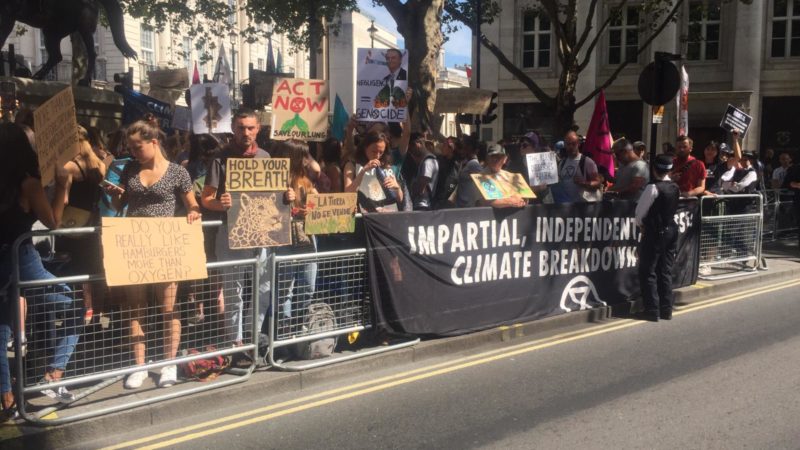 Climate activists have been protesting outside the Brazilian embassy in London, as fires sweep through the Amazon.

Campaigners and NGOs say the devastating fires are the result of Brazil’s far-right President Jair Bolsonaro backing a sharp increase in Amazon deforestation.

The climate change sceptic has promised to open up the Amazon to mining and farming – emboldening farmers to burn large sections of the rainforest for soy and beef production. Deforestation in the Brazilian Amazon has increased 67% since President Jair Bolsonaro came into power.

.@XRebellionUK are at the Brazilian Embassy in London calling on President Jair Bolsonaro to #ActNow to protect the Amazon rainforest:https://t.co/hbdusbHDSX

The protest come as people gather outside Brazilian Embassies and consulates around the world.#ActForAmazonia pic.twitter.com/Cpfh8gwZcP

But while the Amazon burns, the UK government has been accused of cosying up to the administration in a desperate dash for post-Brexit trade.

A government minister has just ended his four day trip to Rio and Brasilia – and seems to have had a great time.

Labour has challenged the Tories to stand up to Bolsonaro, whose far right government they say has facilitated the current forest fires that threaten the world.

My last engagements in Brazil were with the superb Minister @MarcosTroyjo @MinEconomia to discuss increasing trade and prosperity and to sign an MOU between UK and Brazil on the Prosperity Fund to enhance trade and facilitate ease of business @tradegovuk pic.twitter.com/UMYwauqhys

“Our country is looking for actions to stop this crime against the environment and indigenous people. Instead our government cosies up to a member of Bolsonaro’s far right administration. Their actions are depressing yet not surprising.

“The government should offer concrete help to those trying to stop the fires, not to the ones contributing to it with a reckless industrial and environmental policy. Policies that are trashing the very lungs of our planet.”

“It’s no surprise that this government is cosying up to Bolsonaro. Our governments have consistently supported every effort to expand agribusiness across the global South for years, to devastating effect for ecosystems, communities and our planet.

He added: “We shouldn’t forget that the power of agribusiness has been long-established in Brazil through consecutive governments: its profits assured by free trade agreements like EU-Mercosur, its impunity guaranteed by non-existent regulations to tackle corporate power, and its longevity defined by our insatiable consumption.

“The City of London plays a direct role in assuring the power of global agribusiness. Trade Policy Minister Conor Burns was in Brazil to maintain business-as-usual.”

Labour shadow ministers have now written to the Prime Minister to call on him to “immediately tell President Bolsonaro that his reckless destruction of the Amazon has to stop.”

The letter, signed by Rebecca Long Bailey, Emily Thornberry, Sue Hayman, Barry Gardiner and Danielle Rowley, warns of the disastrous effect of the fires, which are worsening the climate crisis, threatening biodiversity and are a catastrophe for indigenous people living in affected areas.

Labour is urging ministers to examine how the UK is complicit in this catastrophe and introduce tough new measures to stop UK companies from aiding and abetting the destruction of the Amazon. The shadow ministers call on the Prime Minister to use the G7 meeting of world leaders to raise the Amazon crisis and climate change.

The Amazon accounts for around a fifth of the world’s oxygen – meaning the current fires amount to a global crisis. Will Johnson’s government put pressure on their new pals?