The Ballymurphy massacre tore lives apart - justice should be done for it. 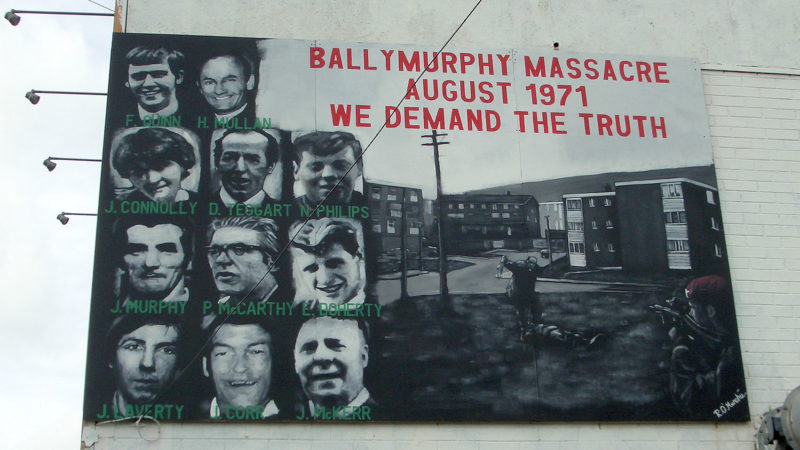 Much of the Tory right, including Defence Secretary Penny Mordaunt, have been calling for measures to make it harder to bring UK soldiers to justice.

Mordaunt, who is backing Jeremy Hunt in the leadership race, said “former soldiers should not be pursued unfairly for events that took place decades ago”.

At the time she said this, the families of victims of one “event that took place decades ago” were preparing to give evidence to the Ballymurphy inquiry.

In August 1971, the British Army launched Operation Demetrius – where they began the policy of ‘internment’ by conducting armed raids in Belfast and seizing and detaining hundreds of people without trial.

On the Ballymurphy estate in West Belfast, these raids were accompanied by a massacre in which British paratroopers killed ten people.

These victims included a priest Father Mullan, an 18-year old Francis Quinn and Joan Conolly. All of them had been shot rushing to the aid of wounded people.

Father Mullan had been waving a white baby grow when he was shot. Francis Quinn was killed trying to help Father Mullan.

Another victim was Danny Teggart. When he went missing, his daughter Alice Harper asked a nearby army post if they had seen him.

According to the Morning Star, Alice Harper told the inquest that the soldiers mocked her. They said they only had time for killing. When she walked away, they sang “where’s your papa gone?” after her.

When she returned, they allegedly said: ““There is a f**king unidentified body in the Laganbank morgue, why don’t you try there?” She tried the morgue and the body was her father’s.

One of the soldiers of the 2nd para regiment, Henry Gow, has claimed that soldiers ran a sweepstake on who would the first to kill somebody. The money was spent on a “piss up”, he said.

Gow also said that the skull of one victim, Henry Thornton, was used as an ashtray by a colleague of his. Thornton was driving to work when his car backfired, prompting a soldier to shoot at him.

“On the day of internment, everybody on the street was an enemy,” Gow added.

While the Army initially claimed that the victims were “terrorists”, they have now at least partially backtracked on this.

Sir Geoffrey Howlett commanded the second battalion parachute regiment, which was one of those accused of involvement in the massacre. He told the inquest that he now accepted that “most, but not all, were not IRA”.

One army medic has claimed he heard an officer suggest planting ammunition on the dead bodies – although the medic said he refused to do this.

Soldiers have claimed that there were shots directed at them but there are no reports of injuries.

Soldiers who have disputed the official version of events claim they have been subject to assaults and death threats from other soldiers.

The extent to which these allegations are true is up for debate but, if true, people who use skulls as ashtrays, mock little girls whose dads have just died and suggest planting ammunition on victims should be brought to justice.