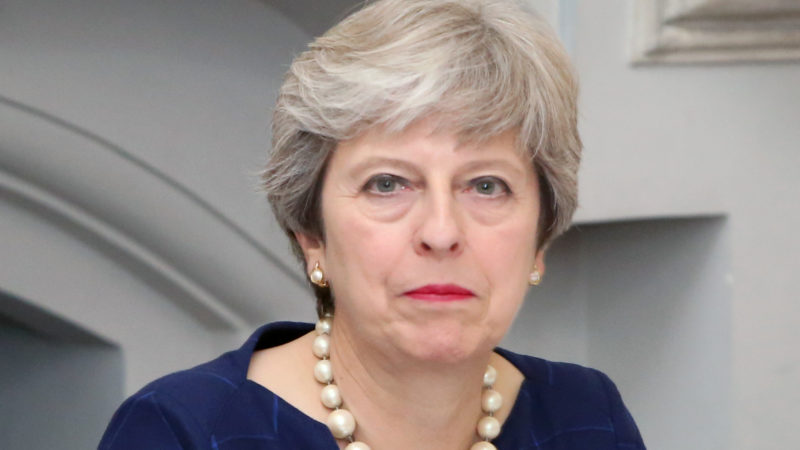 Desperate not just to be known as “that PM that didn’t deliver Brexit”, Theresa May is flying off to Geneva today for a summit on modern slavery.

She will reportedly say that “modern slavery reaches into every corner of our lives – in the clothes we wear, the food we eat, the services we pay for.”

She’s quite right, and she was right to introduce to introduce the Modern Slavery Act – which requires large organisations to produce a statement saying how they’ve tried to eradicate slavery in their supply chains.

However, May and her succesors as Home Secretary have also made changes which pushed human trafficking victims towards suicide and made the fight against modern slavery much harder.

Along with her successors as Home Secretary, she cut the weekly benefits to asylum-seeking victims of trafficking from £65 a week to £37.75.

This affected more than 1,000 people including a 30-year old Albanian woman who (according to the Guardian) fell into the hands of sex traffickers after refusing to marry a man her family had selected for her. She was brought to London, drugged and raped seven to eight times a day

According to Wilson’s Solicitors, who represented her in a recent court case:

“As a result [of her abuse] she suffers from depression and PTSD. Since the cuts, she was no longer able to afford to travel to therapy, vocational training and mentoring which were helping her to build a more positive future, with skills that would mitigate the risks of re-exploitation. She became socially isolated and attempted suicide.”

Despite everything she had been through though, she and a 19-year old Sudanese man summoned up the strength to take the government to court to challenge the cuts – and they won.

The judge ordered the government not just to reverse the cuts but to pay back all the money they had taken from trafficking victims.

As well as making life miserable for people who’ve already been through more than most of us can imagine, these kind of cuts make it harder for people to escape trafficking.

“The cuts undermine efforts to defeat modern slavery by making victims more vulnerable at a crucial time when they are meant to be supported to recover and escape the influences of the traffickers.”

“For over eight months, our client has been denied all the services vital for her recovery from her past traumatic experiences. It is not a simple road to recovery for victims of trafficking and modern slavery.”

“Many of our trafficking clients are too fragile to start formal treatment or are waiting for a long time before counselling or therapy is available.”

“It is crucial that support groups and activities are accessible in order to empower victims to move forward in their recovery. The cuts prevented our client’s from maintaining contact with her support network or attending her counselling and vocational activities.”

“It made her feel powerless again and she felt so hopeless about her future that she attempted suicide.”

Another way in which the government endangers human trafficking victims is its policy of only providing support for 45 days – no way near enough time for people to rebuild their lives. So charities have to pick up the slack when they can get the funding to do so.

Looking outside of the UK again though, May will reportedly announce funding today of £10m to reduce exploitation of children in Africa’s agricultural industries.

While this sounds positive, £10m is peanuts. ‘Africa’ is a rather large place with quite a lot of children and a fair few agricultural industries.

So how far is £10m, which is 0.3% of what we’re going to spend renovating parliament, going to go?