"I will be proud to hand over a bigger, stronger party on July 23rd." 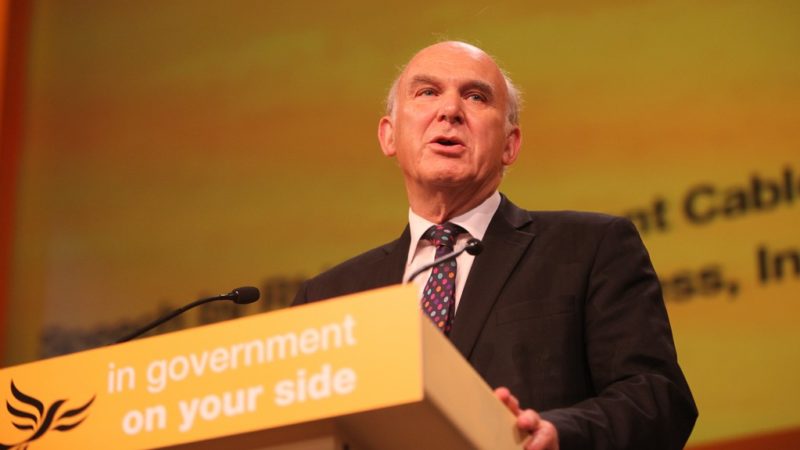 The Liberal Democrats have opened nominations for party leader, as Vince Cable triggers the contest to choose his successor.

The new leader will take over on 23rd July. Cable’s resignation follows the party securing significant gains at the start of May. The Lib Dems are also expected to pick up MEPs following the European Elections on Thursday. Vince Cable has written to party members reflecting on his time as leader and what’s next (full letter below).

Responding to the start of the contest, Party President Sal Briton said:

“Vince Cable has led the Liberal Democrats during the most tumultuous time in British post-war politics, but under his leadership we have grown in strength enormously as well as leading on the biggest issue of this political generation: Brexit.

“Vince’s calm and mature leadership of the Liberal Democrats has helped us gain hundreds of seats in local elections and take control of councils up and down the country, as well as surging in the polls leading into the European Elections, putting us in second place ahead of both Labour and the Conservatives at 20%.

“I want to thank him on behalf of all the Liberal Democrats’ 100,000 members and encourage those who share our values to join us in the coming days and vote in the leadership election that will now take place.”

Nominations for the position of party leader are now open. Candidates must be Members of Parliament and be proposed by at least 10% of other members of the Parliamentary Party in the House of Commons and supported by 200 members in aggregate in not less than 20 local parties. Nominations will close on 7th June

The contest will conclude with the announcement of the new leader on 23rd July 2019.

Last night, the British people finished voting in the European elections. The fallout is there for all to see, with the Prime Minister finally conceding this morning that she has reached the end of the road.

Our campaigning over the last three years has kept the cause of remaining in the European Union alive, and I now believe we have a strong chance of stopping Brexit. When the votes are counted on Sunday, I expect us to do well.

I want to thank the volunteers who have made that possible. I was very touched while campaigning around the country by the enthusiasm and optimism of our members and supporters.

Many who kept going through difficult years for the party are now enjoying our resurgence as a major national force.

Our long and proud tradition of success in local government was revived this month by the best local election results in our party’s history. In the last two years, we have gained 780 more council seats and 15 new councils.

And membership is at record levels with a strengthening base of supporters amongst students and young people.

Together, we have rebuilt the Liberal Democrats – thank you.

I said earlier this year that the time would soon come to hand over the leadership of the party to a new generation. That process begins today: I will be proud to hand over a bigger, stronger party on July 23rd.

If you have friends who would want to vote in the election to choose my successor, urge them to join by Friday 7th June. Every new member can help shape our future.

There are major challenges ahead. One is to win, finally, the battle to stop Brexit. Our campaigning has given hope; now we need to secure a referendum in Parliament, and then win it.

Another is the opportunity created by the conflict and decay within the two main parties to build a powerful, liberal, green, and social democratic force in the centre ground of British politics. We are now in an excellent position to lead such a movement.

As we do so, I am confident that we will regain ground at Westminster, with a big group of MPs and real influence on the national stage.

Thank you, as ever, for all that you do for the Liberal Democrats.