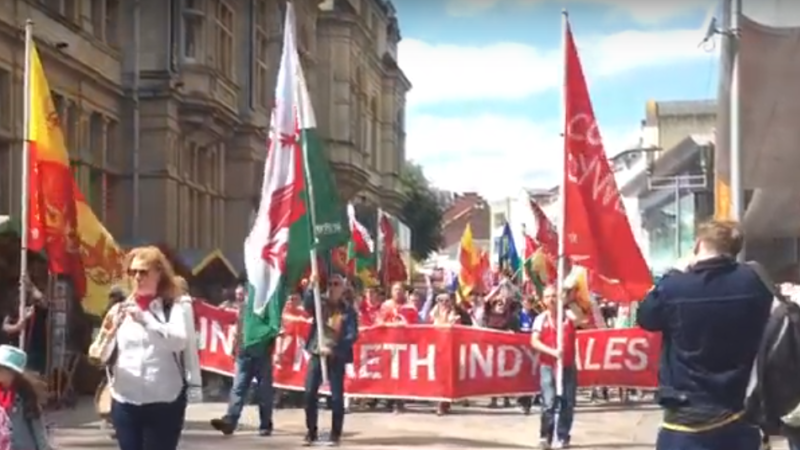 The organisers of a Welsh independence march in Cardiff have claimed it is the first ever such protest.

Estimates of the attendance figures ranged from “hundreds” to 3,000 people calling for independence from the United Kingdom.

The Welsh independence movement is led by the Plaid Cymru party. Its leader, Adam Price, said that decades of neglect from the UK Government has resulted in poverty in Wales and that coupled with the Brexit chaos was enough to show that Westminster was “not fit” to govern or represent Wales.

He cited the emergence of various grassroots organisations including Yes Cymru, Undod, AUOB and Welsh Football Fans for Independence as a sign that attitudes towards Welsh independence is changing.

He said: “For many years, our desire to see an independent Wales has seemed distant. But the tide is turning, the marches are growing, and the voices are louder.

“Decades of Westminster neglect have resulted in poverty and under-investment. A third of our children are living in relative poverty and you only have to look at the Brexit chaos to see that Westminster is not fit to govern or represent Wales.

“People are waking up to the idea that independence is normal and that the solution to our problems in Wales is to take our future into our own hands.

“Imagine what an outward, fairer, progressive and welcoming country, with all the democratic and economic levers it needs and where anyone who wants to be Welsh can call Wales their home, could contribute to the world.

“Today, I will be proud to march alongside my fellow citizens from all across Wales to proudly declare that Wales’ brightest possible future is as an independent nation at the heart of Europe.”

A poll conducted in March 2019 showed that 7% of Welsh people support independence from the United Kingdom.

In the 2016 Brexit referendum, 52% of Welsh voters opted to Leave – roughly the same proportion as in the United Kingdom in general.

In 1997, Wales voted narrowly in favour of creating a Welsh Assembly with some powers devolved from Westminster. The vote was 50.3% to 49.7%.