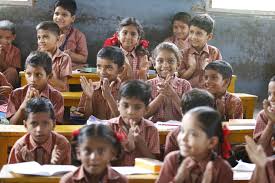 This article was adapted from the introduction to a new report released by the National Education Union and Global Justice Now.

Today, 262 million children and young people worldwide are being denied a basic human right: the right to education.

Despite the commitment made in 2015 by the international community through the Sustainable Development Goals (SDGs) to deliver this right for all children and young people, millions remain unable to access the “inclusive and equitable quality education and…lifelong learning opportunities” they were promised.

The gap between ambition and provision is being exploited by private actors in pursuit of profits, who see the estimated $5 trillion global education market as a business opportunity.

Consequently, the private education sector has grown significantly in recent decades, a development that has perpetuated education inequality and is undermining attempts to “ensure that all girls and boys complete free, equitable and quality primary and secondary education,” as required by SDG 4.1.

The number of children educated privately across the globe has mushroomed in the last 20 years, with over a quarter of all secondary school pupils now enrolled in private schools.

The proliferation of the private sector has reached extreme heights in some parts of the world.

In Lagos, Nigeria, 85% of schools operate as private businesses. In settlements in Nairobi up to 63% of children attend non-government schools.

In a sign of the ambitions of the private sector, Bridge International Academies, a for-profit chain of schools operating in the global south currently educating 500,000 pupils per year, recently declared its intention to grow to 10 million pupils by 2025.

This trend is being perpetuated by the UK’s Department for International Development (DFID). Over the last decade in particular, DFID has been at the forefront of an international push to use public resources in order to leverage private capital into poorer parts of the world.

This is based on the idea that there aren’t sufficient public resources to meet the SDGs, a rationale which has been used to channel huge sums of aid into financial markets and, directly and indirectly, into the private sector, including private education.

These developments are part of wider changes in the way the UK government conceives of its aid spending. Increasingly, the UK is focused on using its Overseas Development Assistance (ODA) to support commercial interests.

This approach was exemplified by a call from the Secretary of State for International Development, Penny Mordaunt, for UK aid to unite “compassion and capital” and expand opportunities for the British public to profit from international development.

This pro-market, instrumental approach to international development is fundamentally at odds with an agenda which places human rights, welfare and the redistribution of wealth at its core.

Support for the privatisation of education is one manifestation of this misguided approach, and brings with it many problems.

Education privatisation risks lowering standards across the board, can lead to a system stratified along social, geographical and income lines, undermines democratic accountability and fails to deliver quality education.

It is the poorest and most marginalised in society who will suffer. As a consequence, the internationally ratified right to education is being undermined.

The UK’s support for private education overseas is informed in part by the presumed success of the privatisation of education in England.

A growth in private methods has been particularly stark in the schools’ sector since 2010, with the dramatic expansion of academies.

This has seen three quarters of secondary schools and a quarter of primary schools removed from democratic accountability and instead controlled by unaccountable academy sponsors which operate, and are legally defined, as private companies.

This trend has been accompanied by little evidence of success, but countless examples of exploitation of the system by private actors, lowered standards for young people and teachers, and deepening social stratification in England.

Instead of privatising education around the world, the UK should instead be supporting tax justice.

Tax justice, including closing tax loopholes and limiting exemptions, and domestic resource mobilisation, are crucial to ensuring that public education systems have the necessary resources to operate successfully.

Properly resourced, fully supported education systems are the only way to deliver education for everyone. Ultimately, we conclude that the privatisation of education at home and abroad will not support the realisation of SDG4.

Mary Bousted and Kevin Courtney are the joint General Secretarys of the National Education Union.

Nick Dearden is the director of Global Justice Now.