The findings should sound alarm bells, as the Tories debate making dozens of risky 'free trade' bills after Brexit. 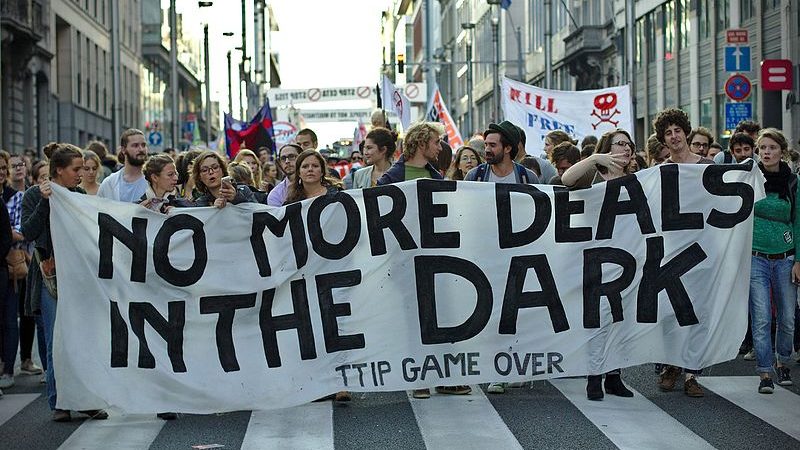 Parliamentary processes for scrutinising trade deals have today been branded as “anachronistic and inadequate” in a report released by Parliament’s Constitution Committee.

Trade justice activists have seized on a report on ‘Parliamentary Scrutiny of Treaties’ – the sixth in a series of Parliamentary reports strongly criticising current processes in Westminster for agreeing trade deals.

The Constitution Committee report stresses that “It is… imperative that Parliament scrutinises the Government’s treaty actions—through the mandate, negotiation and ratification phases—that precede implementing legislation.”

In addition, the report argues that there should be a general principle “in favour of transparency during treaty negotiations” and that mechanisms for agreeing trade deals must “ensure that devolved competences are respected.”

But the report finds that this level of scrutiny is currently absent. Under existing rules “No systematic scrutiny of treaties currently takes place prior to signature.” (p.2) And, after treaties have been signed, the House of Commons can only “delay” their ratification—and only if the Government chooses to make time for it to do so.

Expert witnesses who gave evidence to the report described the current system as “not sufficient”, “not fit for purpose”, “ineffective”, “outdated”, “unsatisfactory”, “inadequate for major international agreements”, and not providing a “constructive balance between Parliament and government,” according to campaign group War on Want.

“The Brexit debate shows how vital it is to have a robust effective system for democratic accountability over treaties, such as trade deals with countries like the US. These deals can override domestic law on everything from food safety to workers’ rights, creating a deregulated free for all and opening up public services like the NHS to further corporate profit.

“We welcome the committee’s assessment that current procedures are not fit for purpose. MPs should be guaranteed a vote on trade deals, just as their counterparts in the US and EU have.”

“From Parliamentary committees to business groups, senior academics to politicians across Parties, there is clear consensus that current processes for agreeing trade deals are seriously inadequate.

“The trade deals currently being pursued by the government risk extending privatisation within the NHS, undermining food safety standards and blocking action on climate change.”

“Trade deals can affect huge swathes of public policy: from public services and intellectual property to food standards and the environment. As the UK entertains the idea of an independent trade policy after Brexit, it is essential that Parliament is fully involved at each stage of the process.”

The government was recently defeated on the issue in the House of Lords, with peers backing an amendment to the Trade Bill that would give Parliament a meaningful vote on future trade deals.

Trade justice campaigners welcomed the introduction of stronger scrutiny and accountability powers. The amended Trade Bill is due to return to the House of Commons soon.