Unite are throwing open their doors again tonight - while hitting out at the causes of the homeless crisis. 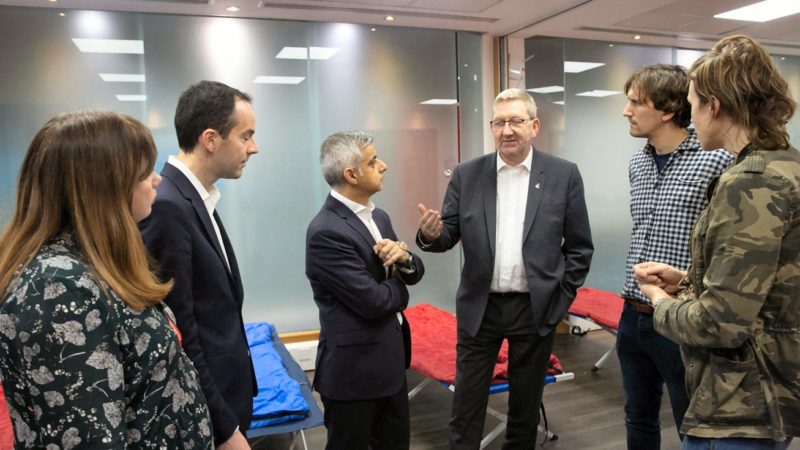 The Unite union is giving shelter to homeless people amid freezing temperatures in London.

Unite has responded  to the Mayor of London Sadiq Khan’s call to offer space for ‘pop up shelters’, with many of the capital’s shelters are already at over capacity.

The mayor is working with homeless charity St Mungos which is servicing and staffing the shelters.

The people who are homeless were being supported by St Mungo’s staff during their stay at Unite’s Holborn offices which started on Wednesday and looks set to continue over the weekend.

This is the first time the London mayor’s ‘Severe Weather Emergency Provision’ programme has kicked into gear. Unite are set to provide assistance when temperatures drop to freezing.

“Local councils provide around 500 emergency places for rough sleepers. But when it goes below zero there’s another 100-150 places needed. At Unite it’s safe and warm and they get communication with an outreach worker.”

But she hit out at the causes of homelessness, which includes ‘a lack of regulations in the private rental sector, and universal credit’. “Austerity is biting,” she said.

The move for Unite to open its doors was praised by activists on Twitter:

Brilliant to hear that @unitetheunion‘s headquarters will shelter some of London’s homeless during tonight’s freezing weather. When our government fails our society, it is the duty of our movement to step in. https://t.co/uLVy75rOLy— Marcus Barnett 🤝 (@marcusbarnett_) January 30, 2019

“Unite has been proud to help out during these bitter cold nights, but we are under no illusion that so much more needs to be done to tackle this increasing tide of human misery.

“The UK is the sixth biggest economy on the planet; it ought to be capable of putting a roof over the head of every citizen, but the fact that it does not is the direct consequence of failed Conservative austerity policies.”

“No one should be sleeping rough in this freezing weather, which is why our emergency shelters are open across the capital every night the temperature drops to zero, offering rough sleepers somewhere warm to stay and further support to help them off the streets for good.

“As the bitter cold continues, it’s great to see Unite using their office space to provide extra shelter for those in need, and I urge Londoners who are concerned about anyone they see sleeping rough to refer them to StreetLink, so they can get the help they need.”