Both the Tories and Labour deserve a share of the blame 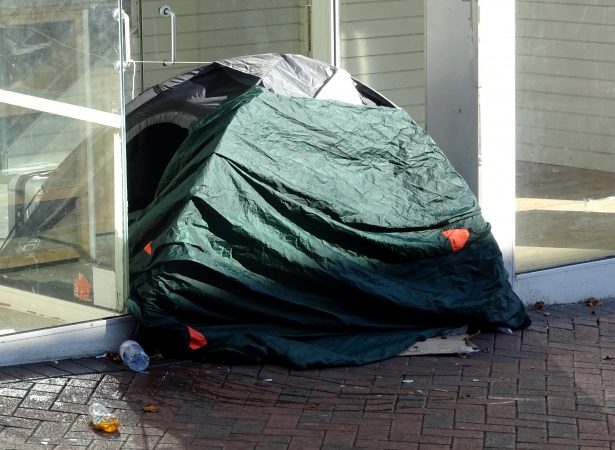 Although homelessness is a bigger problem than what is visible, in the main Welsh population centres such as Wrexham, Swansea, Cardiff and Newport, street sleeping is on the increase.

There remains a housing shortage and people are still falling through the gaps. Shelter Cymru has said that street homelessness in Wales is at “crisis point”.

Sleeping bags are being confiscated from people by authorities. Tents are being torn down. Deaths among people who are homeless has risen by 24 per cent over the last five years.

Homelessness is a blight on any civilised country. One of the chief causes are the recent changes to the benefits system. The failure of the state to provide a sufficient safety net for people has exacerbated the problem. Homelessness is neither normal nor inevitable for any society.

Homelessness happens as a direct result of political choices. Policies, financial decisions, alternative priorities and thwarted life chances are some of the reasons that people end up homeless – and the homeless population is much bigger than can be seen on the streets. We could end homelessness and rough sleeping immediately if we implemented the right policies with the right political will.

However, homelessness and rough sleeping is still seen by some as a “lifestyle choice” as opposed to being a direct consequence of austerity. And remember – austerity policies have been with us for more than a decade now and they were started by Labour and continued and heightened by then Conservatives. The impact has accumulated.

Instead of tackling the politics of austerity and heavily investing in social housing, a concerning narrative around street homelessness has recently developed in our capital city.

The chief executive of the Huggard Centre was recently quoted in the media as calling on people not to donate tents to rough sleepers. This came just before Councillor Kathryn Kelloway, a Conservative councillor in Cardiff, came under considerable criticism – and rightly so – for posing next to some tents in the city centre and calling for them to be torn down by Cardiff Council.

Cardiff Council’s own cabinet member for housing, Labour councillor Lynda Thorne has said that “the charities giving out tents need to understand they are putting rough sleepers at risk.”

What Kelloway and Thorne fail to realise is that hostels, for various reasons, are not always suitable for everyone, and that these tents, especially in cold weather, can mean the difference between life and death when someone has nowhere else to turn.

Shelters for homeless people are considered to be dangerous, to some, with a lack of security, lack of support and substance use being rife.

Many shelters too often end up “warehousing” people with little or no supervision, who can then go on to pose problems for others. This can be particularly problematic for women or those who may experienced trauma as a result of a violent past.

Wales is a different country to England and whilst we share many crucial causes and impacts which affect homeless people – such as the same austerity and cruel welfare reform policies from the Tory UK Government, we also have our own government and parliament. There are things that the Labour Welsh Government could do to end the homelessness crisis today.

Countries comparable to Wales – such as Scotland – are showing what can be done to tackle the homelessness crisis. For example, in Scotland, extra powers have been used to mitigate Tory cuts. The bedroom tax has been effectively abolished.

The SNP government in Scotland has kept the Independent Living Fund and it has mitigated some of the effects of the Universal Credit rollout by the administration of welfare.

All of us would benefit from decisions being taken closer to the people affected by them. If the powers over the administration of Universal Credit were devolved, then Wales would have the potential to protect some of our worst-off people from the callous and harmful, homeless-inducing policies imposed by the Conservative government in Westminster.

We could alter the frequency of universal credit payment for example, end the culture of sanctions and ensure payments are made to individuals and not households – all of which would help to prevent more people falling into homelessness.

But it is Labour who run the Welsh Government – and have done so for two decades. In that time, Labour in Wales has not built enough social housing and Labour in Wales has consistently failed to protect our citizens against Tory welfare cuts and instead have left people behind.

Plaid Cymru do not accept homelessness as an inevitability. We believe that no one should be left behind.

Investment must be put into permanent solutions which provide people with homes and support to rebuild their lives.

Plaid Cymru would fund outreach programmes and emergency accommodation to get existing rough sleepers off the streets whilst tackling the barriers that exist for people accessing shelters through reform of shelters and the environment that can exist in shelters.

We would ensure there is a range of accommodation types that can be accessed by homeless people so that safe places are available for all because there is no “one size fits all” approach. This would include protecting funding for all shelters and refuges for those escaping abusive relationships.

We would replace priority need with a duty on local authorities to secure safe accommodation for everyone found to be homeless, alongside their duties to prevent homelessness – particularly when the temperature dips below zero like we have seen this past week.

These are practical steps that the Labour government in Wales is able to take today.

Our homeless citizens need their own stable and permanent homes with built-in support to rebuild their lives through a ‘housing first’ approach. This is the only way to tackle and end homelessness in Wales once and for all.

It is a national emergency and we cannot wait any longer. Action must be taken today. A failure to do so would be a failure on our part as a society.