As we speak, countries are debating a treaty that could make multilateral nuclear disarmament a reality. Why are we silent? 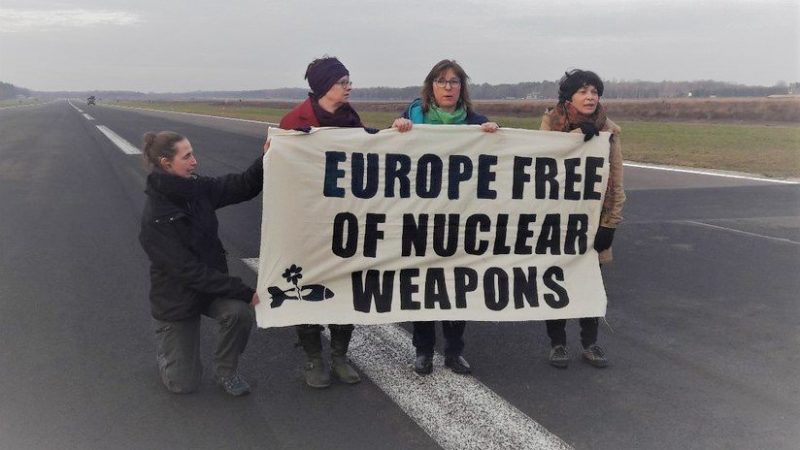 “The hardest thing was getting over the fence – I’m not as nimble as I used to be,” jokes Molly Scott Cato, after the Green MEP was arrested (and released) in Belgium on Wednesday.

The South West MEP had broken through the fence of a nuclear weapons site – with her and three other MEPs laying on the runway for about half an hour next to F-16 fighters.

Before long, guards turned up in a truck and they were taken into custody. The MEPs were released without charge early Wednesday afternoon, though their fingerprints were taken. (Surprisingly, the British embassy faxed the local police station, giving Scott Cato information about her rights.)

But why did the MEPs do it?

As we speak, countries around the world are debating and ratifying a treaty that aims to put into practice a policy that nearly all politicians say they support:  multilateral nuclear disarmament.

The Treaty on the Prohibition of Nuclear Weapons was launched at the United Nations headquarters in New York on 20 September 2017 – and once 50 nations have ratified or acceded to it, it will enter into force. There are now 70 signatories and 21 states that have fully ratified the treaty.

But in the UK there has been next to no discussion of the landmark agreement. That’s partly because, as a nuclear state, politicians aren’t keen on getting rid of our nukes: the treaty commits states to refuse to “develop, test, produce, manufacture, otherwise acquire, possess or stockpile nuclear weapons or other nuclear explosive devices.”

The UN-backed process won the Nobel Peace Prize. It is a Big Deal. But as Molly Scott Cato tells me: “In Britain it’s not discussed at all.”

The South West Green MEP is livid: “”All the European countries should be signing up. When ICAN was set up we promised to disarm. Why are people not carrying through on their commitments?”

Indeed, both the Tories and Labour say they’re committed to multilateral nuclear disarmament. But they don’t follow through.

The European Parliament backed a resolution in favour of the ICAN process in October 2016.

But member states are not moving fast enough to implement it, says Scott Cato. On Wednesday she and three other MEPs were arrested after breaking into a Belgian military airbase to protest against the stockpiling of American B61 nuclear bombs.

The politicians were holding banners calling for a “Nuclear free zone for Europe” and blocked the runway of an F-16 airbase to request the withdrawal of ‘US nuclear bombs on European soil’.

The move follows Donald Trump’s decision to withdraw from a key arms agreement with Russia – one which dates back to Gorbachev and HW Bush. Trump has accused putin of breaking the rules of the deal.

Scott Cato is concerned about what it means for the ‘arms race’: “These weapons are under the control of a crazy mad man.” She means Trump as well as Putin…

“The whole process of disarmament has frozen. We’ve got nations becoming rogue states. The rest of us must work through towards disarmament.”

What’s next? “We’re trying to start a conversation. We need a national debate about whether to disarm. We pay for Trident [the UK’s nuclear submarine programme] and deserve a full public debate about what is it that really makes us safe.”

“Instead, we’ve been bullying some school girl [Shamima Begum]. All we see is posturing by Sajid Javid and Gavin Williamson, while the government does nothing about the real threats to peace.”