"These MEPs will be found on the right side of history for the principled actions they have taken." 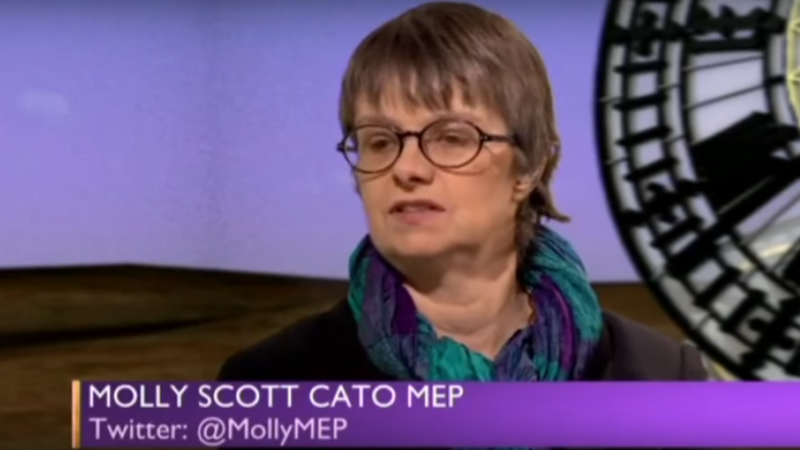 South West Green MEP Molly Scott Cato has been released from custody, after breaking into a nuclear military base in Belgium.

Left Foot Forward contributor Molly Scott Cato is one of four MEPs arrested after breaking into a Belgian military airbase to protest against the stockpiling of American B61 nuclear bombs.

The politicians were holding banners calling for a “Nuclear free zone for Europe” and blocked the runway of the F-16 airbase to request the withdrawal of US nuclear bombs on European soil.

The MEPs were questioned this morning, with Scott Cato released just after midday.

A spokesperson for the European Green Party confirmed Scott Cato’s release and said the other MEPs were expected to be released soon.

Sian Berry AM, co-leader of the Green Party, backed the South West MEP:

“We stand in full solidarity with our brilliant MEP Molly and her Green colleagues who have been arrested for taking a stand against nuclear weapons.

“These bombs have the potential to kill millions of people. They make us less safe, are obsolete in modern warfare and are a colossal waste of money. It is only right all US nuclear weapons are removed from Europe.

“Greens are never afraid to put their bodies on the line for what is right. These Green MEPs will be found on the right side of history for the principled actions they have taken.”

“CND applauds this direct action. US nuclear weapons have no place in Europe – this isn’t a battle-ground for a nuclear war between world powers.

“Since Donald Trump initiated the tearing up of the INF treaty earlier this month, there is a real danger we could see the return of US nuclear missiles to British soil as well as more nuclear missiles across Europe…

“Our country is in a strong position to demonstrate how the nuclear states can work together to reduce and abolish nuclear weapons.

“The alternative is to sit back while the US president tears up all restraints on nuclear weapons and rapidly moves the world closer to nuclear war.”

Ahead of the protest, Molly Scott Cato said:

“Our action is intended to challenge EU countries to remove US nuclear weapons from European soil. Each B61 bomb is 23 times more powerful than the bomb that devastated Hiroshima. These apocalyptic weapons should find no home in Europe.

“We demand that Europe’s nuclear nations immediately sign up to the landmark global Treaty on the Prohibition of Nuclear Weapons and begin the process of decommissioning their nuclear arsenals.”