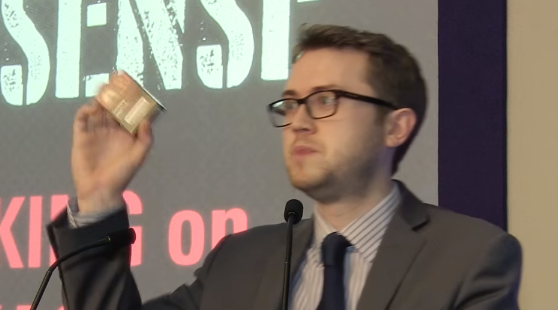 In an email to supporters, the TPA’s John O’Connell said it had been “battling Southampton’s proposed clean air zone” and added:

“If we had done nothing, yet another council would have fallen into the trap of these ridiculous clean air charges.

Luckily the TPA got wind of this proposal and fought back. Alongside TPA supporters and campaigners, we took to the streets of the city to rally opposition.”

Southampton is one of the most polluted cities in the UK. In 2011, air pollution contributed to 6% of the city’s deaths.

One of the main causes of this is road pollution, particularly from trucks going to and from Southampton’s port.

The clean air zone would have penalised the owners of the most polluting vehicles, old diesel buses and lorries, by making them pay more.

In the city’s largest ever consultation, over half of the respondents said they supported plans to charge polluting vehicles.

The TPA though regarded these penalties as a “stealth tax” and claims it campaigned against the charges by taking volunteers to Southampton and telling visiting football fans that their coach tickets would be more expensive.

The TPA’s campaign was supported by Royston Smith, the Tory MP for Southampton Itchen who said the clean air plans were anti-business.

Labour-controlled Southampton City Council eventually backed down on plans to charge vehicles. Instead, they opted to make the buses greener and allow taxi drivers to try electric vehicles before they buy them.

Whether this will be enough for the city to reduce air pollution levels below legally acceptable levels, and avoid an EU fine, remains to be seen.

Commenting, a Friends of the Earth spokesperson said:

“The TPA are being incredibly short-sighted because this is not an attack on business at all. Rather, what is at stake is a public health crisis affecting thousands of people in Southampton alone – air quality here is that bad.

“A charging Clean Air Zone was an opportunity for all those living and working in Southampton and the New Forest to finally breathe cleaner air. Instead we are now looking at a plan with weak proposals that will not effectively limit the use of the most polluting diesel vehicles.

“Southampton will continue to be blighted by dangerous air pollution. Toxic air is especially risky to young children, whose developing lungs could be directly affected by the levels we are seeing in the city and beyond.”

The TPA is an influential private company with links to the Conservative Party.

It describes itself as a “think-tank” but unlike most think tanks and campaign groups has no elected leader or board of trustees.

The company does not reveal who funds it but some details of its donors have leaked.

Its office space is donated by property multimillionaire David Alberto and Tory Donor Sir Anthony Bamford, who runs JCB, is another donor.

Much of the TPA’s funding comes from abroad. In the last five years, it has received £217m from US-based donors.

The identities of many of these donors are hidden. Much of the money comes from a special fund set up to funnel money to the TPA. Those donating to that fund do not have to reveal their identities.

A former TPA employee, Shahmir Sanni described it as “a lobbying group pursuing a right-wing ideology”.

The TPA is part of a network of right-wing lobby groups who meet regularly at 55 Tufton Street in London.

The ‘who funds you’ campaign for think-tank transparency grades think-tanks on how open they are about their funding.

The TPA receives an ‘E’ grade, the lowest possible, alongside the Adam Smith Institute, Center for Policy Studies, Institue for Economic Affairs and Policy Exchange.