His lobbying has held back efforts to cut emissions 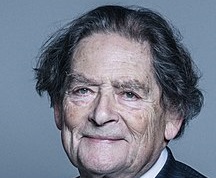 Quietly, covertly, and largely behind the scenes, a small group of fringe Tories continue to lobby for their party to cut the ‘green crap’ so loathed by David Cameron.

That these politicians have an audience at all is largely down to one man: Nigel Lawson.

At the age of 86, Lawson last week stepped down as chair of the climate science denying campaign group, the Global Warming Policy Foundation (GWPF).

Founded in 2009, on the eve of the UN climate conference in Copenhagen, the group’s task was to cast doubt on the climate science and lobby policymakers to avoid taking action to cut emissions.

Ten years later, the group is still at it.

While the GWPF is seen as increasingly fringe by most sensible politicians and parties, Lawson created an apparatus by which the group’s anti-science views could be promoted in the highest echelons of parliament.

Initially, Lawson promoted the group’s views through his leadership of the House of Lords Economic Affairs Committee. Increasingly, it has been through the contacts of other high-profile GWPF trustees recruited by Lawson.

The group now boasts advisors and board members including Viscount Matt Ridley (a hereditary peer and Times columnist who owns a coal mine and who was chair of Northern Rock when its collapse triggered a financial crisis), Lord Peter Lilley (who almost lost his peerage over a cash-for-access scandal), and Lawson’s successor as GWPF Chair, Labour peer Lord Bernard Donoughue.

Donoughue is that rare Labour figure, a man who doesn’t believe what all mainstream scientists believe – that the world is facing a climate crisis.

Donoughue’s views are rejected by Labour leaderships current and past. But like his Tory predecessor, while Donoughue is on the fringe of the party on many issues, his views have the potential to anchor others’ stances.

While he has not admitted to agreeing with Lawson’s views on climate change, his public statements created the space for them to suggest the government should at least put the brakes on many progressive policies that would help boost the UK’s economy and cut emissions.

Remember when the UK subsidised all that renewable energy which transformed the sector and  made the country a world leader in the field? Remember how the Tories brutally and suddenly cut that support? Those drastic changes don’t happen without persistent lobbying from within.

That is Lawson’s legacy.

Brexit may have given Lawson a new lease of life within the public imagination – the long-time Eurosceptic was Chair of Vote Leave. But for almost a decade, the GWPF was the vehicle by which Lawson sought to stay relevant.

It gave Thatcher’s former chancellor an excuse to be given a platform to spout his view that the fossil-fuelled status quo was the most moral economic system, largely based on fiction or misinformation.

But Lawson’s legacy goes beyond the BBC appearances, for which the programme-makers had to frequently apologise.

It goes beyond the nonsense reports the GWPF fabricate and the media occasionally report on a slow news day.

It goes all the way into the fabric of the UK’s policymaking apparatus, ensuring a group of anti-science, fringe lawmakers continue to have a disproportionate influence on slowing the UK’s transition to a low carbon economy.

Lawson may be stepping down, but his legacy within parliament lives on.