The EU does not allow cherry-picking from its four freedoms 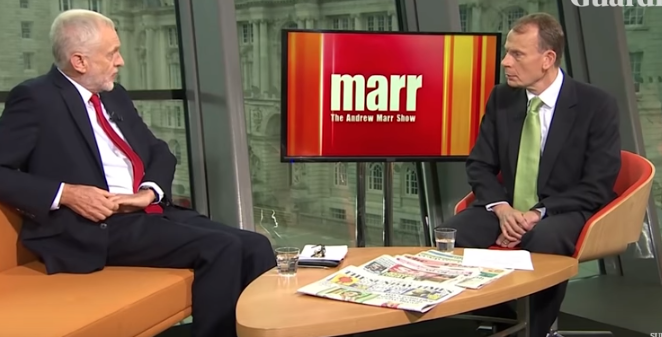 As I watched Andrew Marr interview Jeremy Corbyn on Sunday, I kept looking round the studio to see if there was a unicorn in the room.

I feel like we need this new metaphor for politicians who are accompanied by politically impossible fantasies, rather than glaringly obvious omissions from the discussion.

The Labour leader, in his role as the nominal leader of the opposition, again described his fantasy Brexit deal.

He wants to be outside the single market but able to guarantee we receive the ‘exact same benefits’. Andrew Marr read out an explicit quote from the EU’s chief negotiator Michel Barnier saying this was impossible.

He wants to restrict free movement while meeting the staffing needs of the NHS – with around 100,000 unfilled jobs – and industries such as agriculture and hospitality.

When pressed by Marr on whether any EU leaders, diplomats or commissioners he had spoken to had ever told him such a deal was possible, he was unable to say he had.

Of course not. The EU have always been quite clear: there can be no deal that dilutes the four fundamental freedoms of the EU: the free movement of goods, people, services and capital across Europe. Cherry-picking is no more available to socialists than it is to conservatives.

Corbyn said that both Remainers and Leavers felt angry for the same reasons, namely a feeling of being left behind.

He cited these reasons as lack of investment, poor quality jobs, lack of support on housing and a cash strapped NHS.

It’s true, anger at the Tory government’s cruel austerity policies are something that can unite remainers and leavers.

The difference though is those who voted to Remain don’t blame the EU; they rightly point the finger of blame at the Conservative government.

Corbyn again missed an opportunity, as he has so many times before, to tell people directly – especially Leave voters – that the source of their discontent resides in Maidenhead not Brussels.

Meanwhile, Corbyn poured yet more cold water on the idea of a People’s Vote, or ‘popular’ vote as he likes to call it, in spite of overwhelming support for the idea amongst Labour members and activists.

Quite rightly, Marr pressed Corbyn on what position Labour would take towards Brexit in the election he is so keen to engineer.

Since our electoral system forces voters to choose between only two parties that can form a government, if neither opposes Brexit then an election cannot help us out of the Brexit swamp.

But it was not clear, in the unlikely event that a no confidence vote would be won, whether Labour would continue to support Brexit in its next manifesto.

All Corbyn would say is that the next Labour manifesto would ‘reflect on why people voted the way they did in 2016’. So, just like the Tories, Labour are wedded to the ‘will of the people’ argument, as it was in 2016.

The fact that it is nearly three years since the referendum but only two since the last election make clear how unconvincing this argument is. Why is the ‘will of the people’ with regard to membership of the EU writ in stone while the decision about the national government is not?

The reality is that the will of the people changes and has changed over time.

If it didn’t, we would, God forbid, be stuck with a Tory government in perpetuity, because voters would always vote the same way. For ever.

And what of the two million young people who have joined the electorate since the referendum? What is their ‘will’?

When so many of them have surged towards Corbyn why should he deny them a vote on this issue that will impact on them more than on the older voters who chose Brexit and the Tories to deliver it?

Labour activists are often keen to attack Marr as an establishment lackey but in this case his only offence was to forensically dissect Corbyn’s Brexit position. The fact that this left Labour’s policy in tatters cannot be blamed on the BBC.

Molly Scott Cato is Green MEP for the South West and Gibraltar.