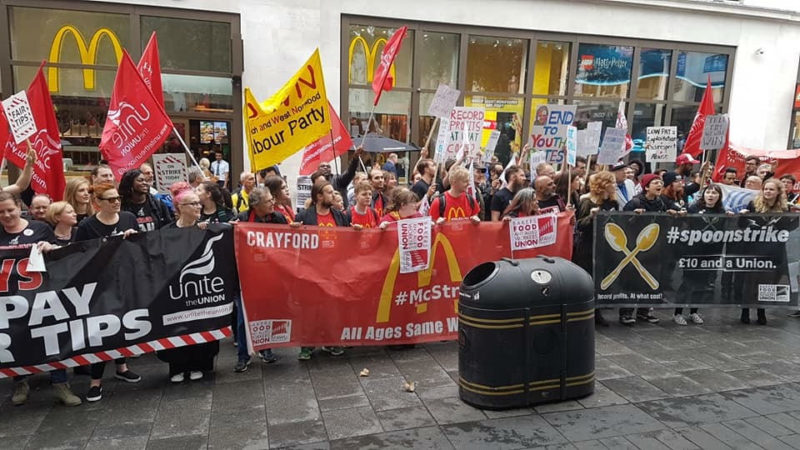 Wetherspoons workers in Brighton pubs are celebrating a bumper pay rise following the first strike at the chain in October.

In September Wetherspoons announced an annual pay rise was being brought forward by six months from April 2019 to November 2018, after the first strikes in the company’s history were announced.

Now, workers at two Brighton pubs are claiming victory after being put on a higher rate of pay – an extra 40p an hour – in addition to the national pay rise.

When approached for comment, the company refused to say whether the strike had led to this bumper pay rise.

A profits warning from November claimed the national pay hike was down to ‘upward pressure on wages’ due to low unemployment and a housing shortage.

But Brighton staff are putting their additional pay rise down to the unprecedented strike action in October.

This win adds to the list of victories the workers have experienced since joining the Bakers’ union and going on strike for the first time in the pub chain’s history.

A spokesperson for the ‘Spoonstrike’ campaign said that in addition to the Brighton pay hike, ‘significant rota issues’ in both pubs were addressed, including the abolition of overnight shifts. Allegations of bullying are also apparently being dealt with, with a management reshuffle and a member of staff successfully appealing their ‘unfair demotion’.

Wetherspoons has nearly 40,000 workers across the UK.

Victoria Jordan, a shift leader at the Post and Telegraph pub in Brighton, said:

“Managers told us we have no support, that we would be ignored and quickly forgotten about – but we proved them wrong. If two pubs in the company can create this much change, imagine what we will achieve as we grow. We are already winning.”

“By organising into a trade union we’ve improved our pubs, won a substantial pay rise for Brighton and changed things we couldn’t have changed alone. We’ve made the company listen to us and take action. We will keep building our union.

“We want every Wetherspoons worker in the country to be paid a wage we can thrive on. And to have a say in all of the decisions that affect our working lives.”

Wetherspoons released a statement on the day of the strike – 4th October – arguing that increasing pay further would mean cutting employee benefits.

“Wetherspoon intends to increase pay in real terms in most years, subject to economic conditions, as we have tried to do in the past.

“Everyone in the pub and restaurant industry works very hard and thelate and early hours are extremely demanding.

“It is understandable that there is pressure on pay with low unemployment and a housing shortage.

“…It’s easy to be cynical about business, but companies like McDonalds, TGI Fridays and thousands of other individuals and businesses make a big contribution to the economy, and provide valuable work and experience for many people.”

Wetherspoons workers across the UK are being encouraged to get in touch with the campaign by emailing [email protected].

“Since the strike Wetherspoons workers from across the country have been getting in touch. They’ve been getting support to tackle the issues that they face. That’s a slow process of building numbers and confidence…

“Given the endemic nature of the issues they face and the growing confidence of workers it wouldn’t be surprising if more strikes are on the horizon.”

The campaign is continuing to fight for a living wage of at least £10 an hour, including ‘equal wages for all ages’, security of hours and for union recognition.