The National Union of Students is reported to be facing bankruptcy if it doesn't make changes. But decisions appear to be being made behind closed doors. 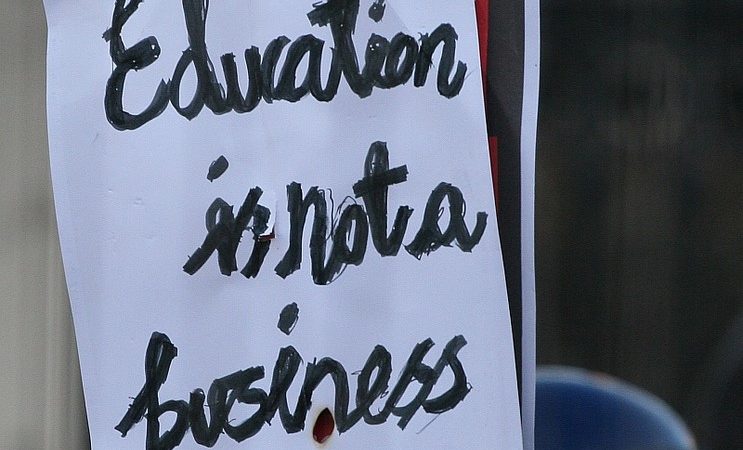 Once more it would seem that the National Union of Students has got itself into a bit of a pickle. This is no mere village-stall variety of pickle though.

The NUS face a whopping projected £3 million deficit by next summer. The cause? Murky. An article in the i paper suggested that ‘bad investment decisions’ and ‘increased competition in the student discount market’ are to blame. The NUS is using – of all businesses – KPMG to conduct a thorough financial audit. Broadly though, for the larger student movement, the causes of this financial malaise are about as clear as Marmite.

The proposed solution? Even murkier. Ominously, though, we do know that it will involve “radical reforms to democratic and corporate structures” which will “drastically simplify and modernise NUS”, at least according to the NUS President.

While the exact proposals circulating at the moment remain largely hidden from the student movement, many activists fear that this will be used as an excuse to cut liberation groups and democratic functions within the NUS.

The ‘consultation’ process of how the NUS is to deal with its cash crisis has for the most part not been open to ordinary students. Most of it is behind log-in walls and conducted in meetings that ordinary students do not have access to. It has been conducted almost entirely through Students’ Union presidents and, bizarrely, CEO’s.

The idea is that union presidents will put forward their thoughts on reform, informed by the views of the students they represent, and that the final say will be at national conference. But this is a far cry from a proper, national, democratic conversation.

But how many presidents, so far, have had democratic debates and motions on their campuses? The NUS hasn’t given them enough time to do so (the ‘consultation’ ends December 21st, with presidents, let alone anyone else, only really getting a clear idea of what was going on towards the end of November).

How much justice can be done to this huge and complex debate within the confines of national conference, where many other items of business will have to be discussed, and the very terms on which it will be debated will be primarily driven by a handful of NUS elites?

Instead, we have a ‘consultation’ process designed to limit debate whilst maintaining a veneer of democracy – an approach that could ram through democratic reforms deemed ‘necessary’ and ‘urgent’ without an awful lot of consideration of alternative solutions.

The alternative? There should be an emergency conference solely on the future of the NUS, with delegates from every affiliated campus elected, meetings held at every campus to debate the view of that student body, and NUS should ‘open the books’ to properly inform those discussions.

This conference and the debates that proceed it should consider multiple visions for the future of the NUS, not accept from the starting point that democracy has to be stunted for our union to thrive.

Any rejection of this denies the essential political character about any spending or cutting within an organisation like the NUS. This isn’t a technical, economic business decision – it’s a political one, about where as a movement our priorities should be.

Gutting minority group representation and internal democracy sends out a startling clear message about the NUS’ current politics, and avoids some genuine questions about the group’s spending.

The NUS hasn’t been there for students for some time now. We desperately need a national union that nurtures, equips and emboldens grassroots student movements, fighting workers exploitation, marketisation, the mental health crisis, climate change and racism.

It needs to do so from the bottom up – being led by and relevant to students. We don’t get to any of these things by gutting democracy – and we certainly don’t get it by excluding ordinary students from serious long-term decisions.

NUS already seems to be on a trajectory towards irrelevance – few students on campus even know what it does. Any cuts to what representation and democracy it does have could well be the final nail in a coffin that has been slowly assembled over the years. Regardless of whatever proposals the NUS does settle on, this needs to be a far more open, transparent and democratic decision-making process than it is currently.

The Student Left Network has called for a motion of no confidence in the current NUS president Shakira Martin, which needs to be passed by 25 SU’s.

Read the draft motion here and sign the petition calling for a more open, democratic decision making process to deal with the deficit.

Bradley Allsop is a PhD student and a committee member for the newly formed Student Left Network.