The fashion industry is one of the world's biggest polluters. It's no surprise that it's also exploitative. But is the sector waking up? 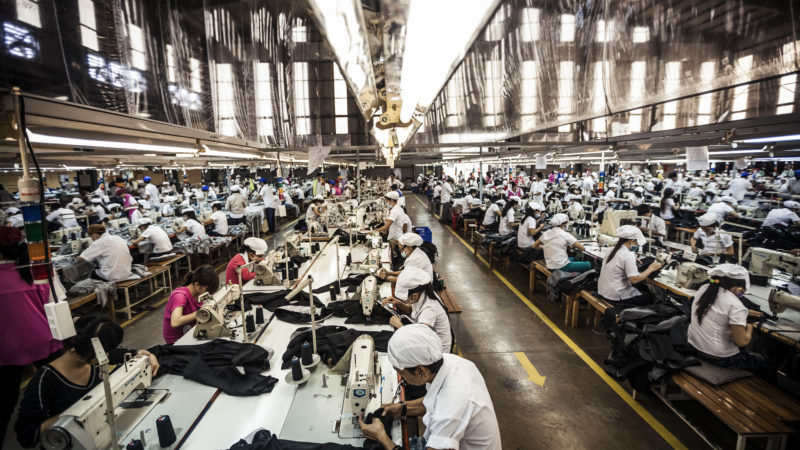 When you consider that the fashion industry has carbon emissions equivalent to flights and maritime shipping combined (or if you put it in national terms, Russia), it is quite astonishing that we had to get to the 24th annual climate talks before there was a major formal event dedicated to it.

Internationally, there’s been a growing focus on the environmental and social damage being done by the industry, particularly so-called “fast fashion” – the massive water and pesticide use of cotton, the issue of microfibres polluting our planet, food and water, the hideous human rights abuses, and exploitation of the workers in the industry highlighted by the Rana Plaza disaster.

But the industry’s carbon emissions have so far largely stayed under the radar of media and general attention.

I went along to the launch Fashion Industry Charter for Climate Action event with scepticism. It was in the official part of the climate talks, and the suits (snappier than usual) were out in full force. I’ve been to similar events for other sectors where the discussion didn’t get beyond platitudes and discussion of energy-efficient light-bulbs.

The presence of a rep from Burberry – recently in the spotlight for disgracefully destroying £28 million of its products to protect “brand value” – won marks for chutzpah, even if it added to my doubts.

My scepticism remained as I heard the representatives of some of the 29 signatories – which also include Puma, Esprit, Gap, Levi and Target – talk about cutting energy use in their factories, stores and offices and switching to renewable supplies. All this is likely to boost their profits.

Nonetheless, you have to start somewhere, and the commitment by brands, suppliers and transporters, working in cooperation with the UNFCC (United Nations Framework Convention on Climate Change) and WWF, to a 30% cut in total emissions from the 2015 baseline by 2030 is a decent start.

It’s certainly better than the aviation industry – the great laggard that is only talking about cutting the intensity of emissions, not the total.

The attendance of much-respected Patricia Espinosa, UNFCC Executive Secretary was further evidence that this was important, and that the pioneering companies may deserve credit for waking up.

Nonetheless, when I got to ask a question, I had to point out the obvious missing part of the equation: the need for a massive reduction in the volume of fashion sales, and increase in the durability of products. A representative from Singapore made a similar point, saying we need to think about “sustainable consumption” of fashion, not just “sustainable production.”

In the first week of COP, we heard that if the Global North wore clothes for twice as long – not hard given the UK Environmental Audit Committee was recently commenting on how many garments were now worn once and then thrown away – the emissions of the industry could be halved.

I got something of a response from the Hugo Boss rep on the panel to my question about volume and durability – saying that his business was already slanted towards quality. I didn’t hear anything on the subject from H&M. The WWF representative referred to the need for “dematerialisation” [Ed: us neither…].

Questions also went largely unanswered on the woeful recycling rates for garments, or on working towards a circular economy for textiles.

It is easy – and often the industry is keen – to blame consumers for “demanding” fast fashion. But of course that “demand” is driven by massive spending on advertising – the process of aiming to make people miserable and towards thinking that spending money will make them feel better.

And this is also where environment and social policy intersect, where issues arise that do not primarily lie in the lap of the fashion sector – although the fact that most shops in the UK pay less than a real living wage certainly has an impact.

An unemployed person who needs a new T-shirt to make a good impression at a job interview, certainly in the UK, is unlikely to have the funds to buy a quality, long-lasting, organic garment. They’ve going to buy the cheapest they can get, and I’m not going to fault them for that.

We need system change, rather than focusing on the behaviour of individuals.

Social and environmental justice are indivisible: to get rid of fast fashion we also have to tackle inequality and poverty, ensure everyone can afford to buy the clothes they need that won’t, literally, cost us the Earth.

Natalie Bennett is at the Conference of the Parties climate conference (COP24) with the Green Economics Institute. She is former leader of the Green Party and writes regularly for Left Foot Forward.