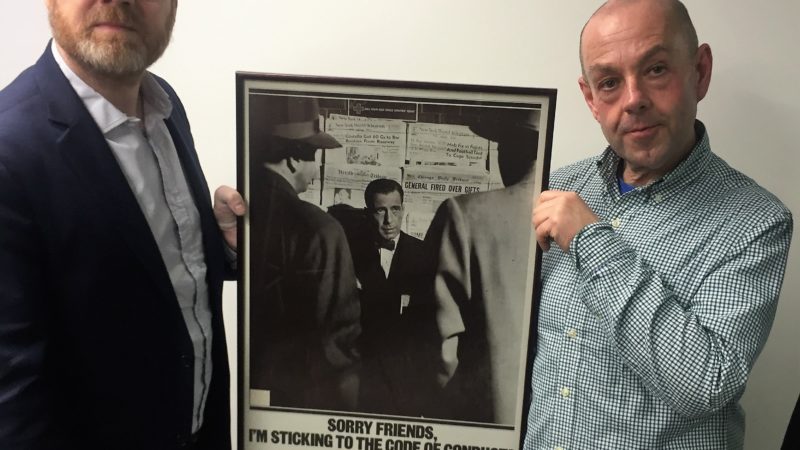 Journalist arrested after exposing Police collusion with terrorists from Tim Dawson on Vimeo.

Picture Northern Ireland’s most senior police officer, George Hamilton, settling down to watch the film No Stone Unturned. It must have left him worried, angry and possibly betrayed. It certainly landed a big decision in his lap.

The documentary feature, made by Oscar-winner Alex Gibney, and originally a BBC co-production, forensically unpicks 1994’s Loughinisland massacre and the woeful response of the Royal Ulster Constabulary.

The bones of the story are well known. On 18 June 1994 Italy’s footballers faced the Republic of Ireland in the World Cup. Deep in the Northern Ireland’s countryside, drinkers in Heights Bar, Loughinisland, were enjoying the match when masked men burst in and sprayed the bar with automatic gun fire. Six people died.

Disgust was widespread, not least as Loyalist and Republican paramilitary ceasefires came within months of the shooting. Police and politicians promised justice would be swift and proportionate.

In the days following the shooting, developments apparently went the way of the law enforcers. The getaway car, rich in forensic evidence, turned up in a nearby field. By a bridge close by, the automatic rifle was found. And within the community, most people knew the names of the killers within a month. They lived scarcely five miles from the crime scene.

But convictions, there were none. Months became years, and then decades. The bereaved families showed a remarkable dignity in their mourning, but eventually, and quite rightly, they started to ask questions. Why had nothing happened?

Twenty three years after the killings, Gibney’s film provided quite a lot of the answers. Based on a secret document compiled by the Police Ombudsman for Northern Ireland, it names the four Ulster Volunteer Force members who are the chief suspects the atrocity.

It unpicks the police investigation which by turns was deliberately slow footed, woefully incompetent and orchestrated in collusion with the killers.

It shows how the police destroyed evidence and, in one particularly shocking exposé, suggests that a Detective Constable pressured the gang’s leader to eliminate a personal enemy.

As the narrative unfolded, George Hamilton could jump in one of two ways. The Police Service of Northern Ireland’s chief constable could have opened a new investigation to catch the killers and bring to justice the RUC officers whose bungling had landed this on his plate. Or he could pursue the journalists who had shone light on a shameful episode in the history of the force he joined at the age of eighteen.

He chose the latter course. It was a terrible misjudgement that will, in time, bring further dishonour to policing in Northern Ireland and may yet bring his career to a premature end.

Very early one August morning, a massive detachment of his officers, bristling with guns, burst unannounced into the Belfast homes of producer Trevor Birney and reporter Barry McCaffrey.

Both had worked on No Stone Unturned. As the journalists’ families and neighbours looked on in horror, officers removed phones, memory sticks and computers and took the arrested men for questioning.

For fourteen hours, Birney and McCaffrey were held and interrogated. Eventually they were bailed, since which time their bail has been renewed until March 2018. They are accused of theft, handling stolen goods, data protection crimes and offences under the Official Secrets Act.

Such an assault on press freedom is an outrage in itself. But in a manner reminiscent of the original Loughinisland investigations, as many questions are thrown up as answers.

Initially the PSNI said that it was acting on a complaint of the theft of documents by the Police Ombudsman for Northern Ireland. That body has since made clear that it made no such complaint.

Then there is the timescale. The film makers told the PSNI that they intended to name the chief suspects in their film six months before its release.

It was a deliberate move intended to allow the police to act if they thought that lives might be put at risk by such a public revelation. Injuncting the film, so that it could not be shown, would have been straightforward at that time.

The police did nothing. Nor did they act when the film was released in November 2017. It was a box office success in Ireland north and south, but the journalists were not troubled until August 2018.

Birney and McCaffrey are traumatised by the experience. They can’t leave Northern Ireland without giving the police prior notice, reams of data wholly unconnected with the film has been removed from their computer server, some highly sensitive, and theirs and their families’ property has not been returned.

They have, however, been buoyed by the support they have received. The NUJ quickly came to their side, of course. We have organised screenings of the film and support meetings in London, Manchester, Belfast and Dublin. More are planned.

In Westminster last week Birney and McCaffrey received a warm welcome from Labour’s Northern Ireland front bench, who promised to lend their support to the case. Other parliamentarians followed.

Former Foreign Secretary Boris Johnson said that their treatment was ‘outrageous’, and undertook to intervene on their behalf. Former deputy prime minister Lord John Prescott gave them a sympathetic ear, as did MPs from the SNP and Sinn Féin.

Many asked if there is some back story that explains the Police behaviour. The best hypothesis is this. There is a political hiatus in Northern Ireland.

As a result, efforts to deal with ‘legacy issues’ arising from ‘the troubles’, have foundered – save in one area. The Police Ombudsman for Northern Ireland has continued to do its work investigating complaints, current and historical, about the conduct of the police.

Those who are emotionally connected to the Royal Ulster Constabulary (the force that the PSNI replaced), have felt a spotlight on their past actions, that other communities have been inadvertently spared.

That might be an explanation, but it is no excuse. The best thing that could now happen is for George Hamilton to admit his mistake, drop the case and get on with pursuing the killers. If that does not happen, then the more people who register their concern about this case, the better.

Birney and McCaffrey are clear. This is a deliberate attempt to discourage investigative journalism – particularly when it concerns difficult subjects from the past. Whatever your feelings about the police, or the politics of Northern Ireland, or the conduct of the media, democracy is a risk if we don’t make our protests as noisily as possible.

Tim Dawson is a freelance journalist and member of the National Union of Journalist executive council.